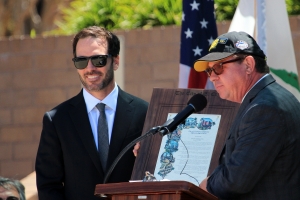 November 20, 2019 (San Diego’s East County) – Jimmie Johnson, who made history after winning a seven NASCAR Sprint championships, has announced he is on track to retire next year.  A native of East County honored as a hometown hero locally, Johnson posted a video titled “#Chasing 8  one final time” on his Twitter feed to announce his final season.

In the video, he states, “I’m so thankful for 18 incredible years of racing in NASCAR. The sport has been good to me. It has allowed me to do something I truly love. I showed up chasing a dream and achieved more than I ever thought possible. I’m looking forward to next season and celebrating what will be my last year as a full-time NASCAR Cup driver. I know what this team is capable of, and I hope 2020 is one of the best yet.”  View video:  https://www.facebook.com/JimmieJohnson/videos/562999694531303/

According to NASCAR, Johnson has won seven titles in NASCAR’s top division, tied for the all-time most with Dale Earnhardt and Richard Petty — both members of the NASCAR Hall of Fame’s inaugural class. The 44-year-old driver is tied for sixth on NASCAR’s all-time win list, his 83 victories equaling the total of C 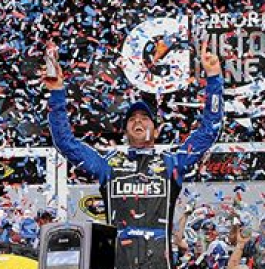 He’s also a philanthropist.  The Jimmie Johnson Foundation has given away over $11.5 million dollars through its Champion Grants program dedicated to helping children, families, and communities in need.  The Foundation grants have included millions donated to local schools in El Cajon and Santee, where Johnson grew up.  The Foundation also worked with Habitat for Humanity to build four homes in El Cajon.

Photo, right: Jimmie Johnson victorious after NASCAR Spring in 2013, via his Twitter feed

He’s been honored at the White House and had “Jimmie Johnson Day” proclamation by El Cajon, presented by Mayor Bill Wells, and by County Supervisors in the past.  Johnson began his racing career in the Santee sand pits and took up dirt biking before auto racing, backed by his long-time sponsor, Lowe’s home improvement stores.  He also returned through the years to meet his fans, including a rally at Lowe’s in Santee in 2009 where then Mayor Randy Voepel presented Johnson with honorary keys to the city, calling Johnson a “hometown hero” and quipping that he might raise the speed limit just for Johnson.

Supervisor Dianne Jacob summed up Johnson’s legacy as a champion at that event, stating, ““Besides the greatness you’ve achieved, 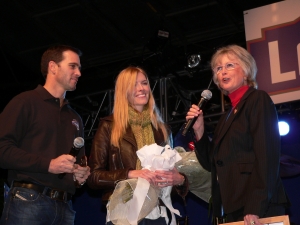 you’ve given back to your community—you haven’t forgotten your roots.”

Photo,left: Dianne Jacob presenting a Jimmie Johnson Day proclamation to him in 2009; photo by Miriam Raftery