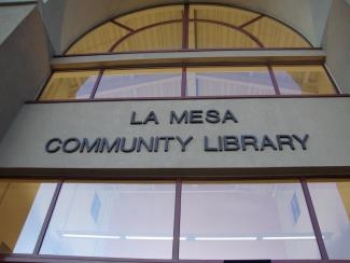 September 7, 2015 (La Mesa) -- A controversy arose at the August 11 La Mesa City Council meeting when Friends of the La Mesa Library President John Schmitz noticed that a contract for the city to hire a consultant to conduct a Civic Center/Old Police Station Feasibility Study and Master Plan did not include a permanent library building. He requested that the Council add the library back in, as it was included in earlier Master Plans. Despite this omission, the Council approved the study as is, without the library.

The Council will review a Staff Report on the issue of "Interim" vs. "Permanent" library on its agenda for tomorrow at 4:00 p.m., in which Staff takes the position that the City is not obligated to build a "permanent" Library building.