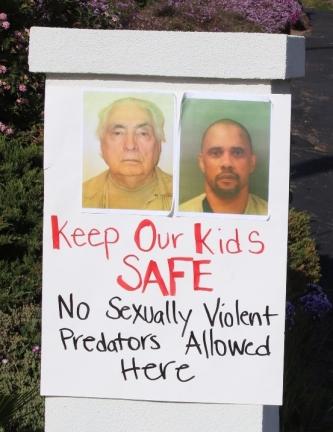 "The SAFE Act would end the ‘Hide the Predator’ game the Department of State Hospitals plays when releasing SVPs into communities.” – Senator Brian Jones

Photo:  Sign at a protest last year near Mt. Helix, where residents rallied to block placement of sexually violent predators.

Jones’s Senate Bill 814, the “Sexually Violent Predator Accountability, Fairness, and Enforcement Act” (SAFE Act), was introduced in response to the California Department of State Hospitals (DSH) and its contractor repeatedly trying to place SVPs in East and North San Diego County, as well as other unsuspecting communities throughout the state.

“The communities of Mt. Helix, Ranchita, Borrego Springs, and Rancho Bernardo were recently jolted by the state’s foolish efforts to put an SVP in their communities,” said Senator Brian Jones. “The attempted placements of monsters Douglas Badger and Merle Wakefield constitute a troubling pattern of the Department of State Hospitals playing ‘Hide the Predator.’”

He adds, “Fortunately, judges in both cases intervened and prevented the forced and dangerous placements of SVPs into family neighborhoods. These SVP placement games by the state’s placement contractor – Liberty Healthcare – is not unique to the San Diego region and will probably be repeated again. Our SAFE Act would require transparency in the SVP placement process, force state officials to own up to these decisions, and make public safety the highest priority.”

1)     Mandate that the Director of the Department of State Hospitals publicly report annually how many SVPs are in each county, and in which supervisorial district;

2)     Make the highest criteria of any potential placement of an SVP be that of public safety;

3)     Require the Department of State Hospitals to take ownership in the process by approving any placements BEFORE the vendor can sign any leases for placement locations; and

SB 841 was granted “reconsideration” so it can be brought up again for second vote before April 29th.