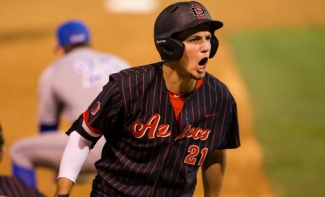 In San Diego State's week, which featured a 3-1 record over four road games, Verdon hit .471 (8-for-17) with six doubles and nine RBI. In each of the four games, Verdon recorded at least two hits, one RBI, and one extra-base hit.

Verdon started off his red-hot week with a 2-for-4 showing at San Diego last Tuesday, including a go-ahead RBI double to lead SDSU to a 9-3 win over its crosstown foe. In the series opener against Cal Poly on Friday, Verdon set a new career high with four RBI against the Mustangs to set the table for SDSU's 9-7 victory.

The Granite Hills HS product slugged .824 for the week while posting a .500 on-base percentage. Verdon particularly thrived in RBI situations last week, going 5-for-10 with runners on base last week while going 4-for-8 with runners in scoring position.

Verdon's 11 doubles on the season rank fifth nationally and first in the Mountain West, while his 20 RBI sits as fourth most in the MW. Verdon also leads the Aztecs with 13 extra-base hits, a .574 slugging percentage, and 39 total bases, and is currently second on the team with a .338 batting average.

Verdon and the rest of the SDSU baseball team are back in action Tuesday, March 20with a 6:00 p.m. contest against CSU Bakersfield at Tony Gwynn Stadium.