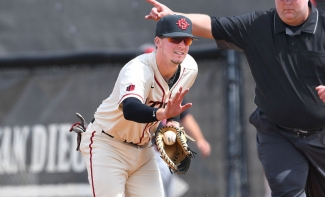 The Granite Hills HS product became the second Aztec this season to homer in three consecutive games, joining Bible, after hitting his ninth, 10th, and 11th home runs of the season against UC Riverside and New Mexico last week. Verdon's 33 extra-base hits this year are the most by an Aztec since the start of the 2006 season and 17.4 percent of his 2018 at-bats have resulted in extra-base hits, good for the best percentage in the Mountain West.

Verdon opened his week up with three consecutive performances with at least one home run and three RBIs, including three-hit showings in SDSU's 8-6 win over UC Riverside and SDSU's 11-5 series-opening win over New Mexico on Friday.

Verdon also made some edits to the SDSU record book this past weekend, belting his 18th career home run on Saturday, which puts him in a tie for 20th in program history with MLB and SDSU Hall of Famer, Tony Gwynn. Verdon's 21st double of the season hit on Saturday is also tied for the most by an Aztec in a single season since 2002.