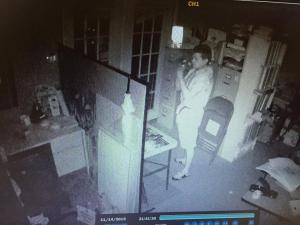 November 16, 2015 (Lakeside) – On Sunday morning, employees at the Lakeside River Park Conservancy found their office had been broken into. A laptop computer had been stolen, the alarm dismantled, and food from the fridge scattered across tables.

A security camera revealed an image of the intruder eating and tampering with the alarm system The Sheriff’s department sent Deputy Darryl Patmon out to the scene to investigate.

The next morning, at 7:30 a.m, employees again arrived at work and discovered the same man seen in the video standing in the kitchen, drinking tea after sleeping in the office and apparently breaking some items, the River Park’s Facebook page indicates.