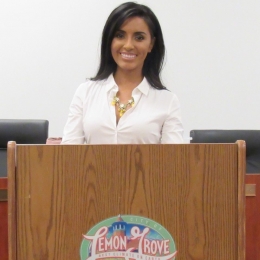 June 22, 2022 (Lemon Grove) – A judge has lifted a restraining order which had barred Lemon Grove Councilmember Liana LeBaron from her home due to her husband accusing her of assault. The order was ended after LeBaron’s husband, Timothy Howell, told the judge that the couple had sorted matters out civilly.

“I’m very pleased to hear it’s been civil,” Judge Shereen Charlick stated, the San Diego Union Tribune reported last week. “I expect that to continue.” The judge added that the restraining order could be reinstated if needed.

The order had prohibited LeBaron from going near her husband, their home, his vehicle, and their dog.

LeBaron was arrested in April, as ECM reported. She was released on bail and it is unclear whether she may still face any criminal actions. Her husband, an El Cajon Police officer, alleged that LeBaron kicked, hit, and bit him, as well as verbally abusing him during an argument over increasing his life insurance.

LeBaron says the abuse allegations are false. She has accused her husband of trying to portray himself as “the victim rather than the aggressor” during divorce proceedings, noting that he could lose his right to carry a gun or work as a police officer.

The judge indicated she never saw any physical evidence of abuse, such as photos, but also said LeBaron did not provide a formal response to the accusations.

It is unclear whether the couple has reconciled or is parting on amicable terms, though they exited the courthouse together after the hearing, according to the San Diego Union-Tribune.

Separately, the Lemon Grove City Council earlier this year tabled a proposed resolution to censure LeBaron over allegedly harassing city staff. The city claimed some staffers had left the city as a result, however the city failed to provide any evidence of this in response to repeated public records requests from East County Magazine that the city failed to respond to in violation of the state’s public records laws.  LeBaron denied harassing staff, but has acknowledged calling fellow councilmembers and the mayor “buffoons.”

LeBaron is not the only Lemon Grove Councilmember recently accused of violence. Former Councilman David Arambula, who lost his reelection bid in 2020, faces a civil lawsuit alleging that he assaulted and injured Lemon Grove businessman Chris Williams during a meeting at Arambula's home, where Williams' application for a dispensary was discussed, according to Williams and a witness. Williams' suit against Arambula and the city remains pending.

For a list of national domestic violence hotlines as well as local services and shelters, visit saysandiego.org.