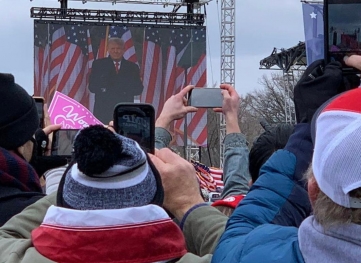 Photo:  Former President Donald Trump’s speech shortly before the Jan. 6, 2021 attack on the Capitol.  Public domain image from Voice of America via Wikipedia

The government watchdog group American Oversight said the ruling is a "clear call for accountability and further investigation of the attempt to subvert the election."

In his 44-page ruling, U.S. District Court Judge David Carter wrote that Trump and Eastman "launched a campaign to overturn a democratic election, an action unprecedented in American history."
"Based on the evidence, the court finds it more likely than not that President Trump corruptly attempted to obstruct the joint session of Congress on January 6, 2021," the judge asserted.
Carter also found that Trump, Eastman, "and several others entered into an agreement to defraud the United States by interfering with the election certification process."
"Their campaign was not confined to the ivory tower—it was a coup in search of a legal theory," he wrote. "The plan spurred violent attacks on the seat of our nation's government, led to the deaths of several law enforcement officers, and deepened public distrust in our political process."
"The illegality of the plan was obvious," Carter continued. "Our nation was founded on the peaceful transition of power, epitomized by George Washington laying down his sword to make way for democratic elections. Ignoring this history, President Trump vigorously campaigned for the vice president to single-handedly determine the results of the 2020 election."
The judge's ruling ordered 101 emails sent by Trump to Eastman be turned over to the bipartisan House select committee investigating the January 6 insurrection.
Carter appeared to lament the limited scope of the ruling.
"More than a year after the attack on our Capitol, the public is still searching for accountability," the judge wrote. "This case cannot provide it. The court is tasked only with deciding a dispute over a handful of emails."
"This is not a criminal prosecution; this is not even a civil liability suit," he added. "At most, this case is a warning about the dangers of 'legal theories' gone wrong, the powerful abusing public platforms, and desperation to win at all costs."
That doesn't mean the ruling is inconsequential.
"There were legal implications from the ruling for the House committee and for Eastman," writes Washington Post correspondent Phillip Bump. "But, particularly when coupled with the finding last month that Trump probably entered into a civil conspiracy with extremist groups similarly aimed at blocking the 2020 election, Carter's assertion that a preponderance of evidence suggested that Trump violated the law is historic and enormously significant."
According to a tally by the watchdog group Citizens for Responsibility and Ethics in Washington (CREW), Trump has been credibly accused of committing at least 48 criminal offenses during his tenure as president or while campaigning for the office. In addition to attempts to steal the 2020 election, these include campaign finance crimes and coverups, obstruction of justice, destruction of presidential records, and false public financial disclosures.
"Despite Donald Trump's staggering record of likely criminal misconduct as president and candidate for that office, he has not been charged with a single criminal offense," CREW senior counsel for policy and litigation Conor Shaw wrote earlier this month.
"While adherence to the rule of law requires that prosecutors pursue criminal indictments only where the facts, law, and principles of prosecution support such action, it is also critical that no individual be insulated from accountability simply because they are a national political figure, a former president, or a candidate for public office," he continued. "Choosing not to pursue accountability for fear of the political criticism or consequences is itself a deeply political act."
Shaw added that "if President Trump avoids criminal prosecution for these potential offenses because prosecutors are unwilling to pursue legally justified cases against him, the message to him and future presidents will be clear: you can commit crimes with impunity."

however this hole is like Teflon nothing sticks to him.