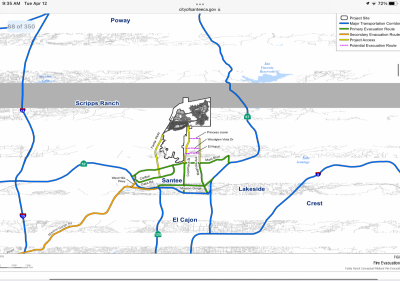 April 12, 2022 (Santee) -- Fanita Ranch, the 3,000 unit housing project that was approved by the city of Santee two years ago, received another setback last week when a San Diego judge ruled the City must rescind all the legal permits for the construction.

The judgement by Superior Court Judge Katherine Bacal made last month and filed April 6, calls on the city to vacate a series of resolutions that gave Fanita Ranch the green light in September 2020. Bacal faulted the city and its contracted experts for creating an inadequate environmental report about all the impacts from the project, particularly the lack of safe evacuation routes in the wake of an emergency such as a major wildfire.

“Again, it is not clear from the information presented whether the residents (of Fanita Ranch) and those in the surrounding community would be able to timely evacuate,” Bacal wrote.

The judge was particularly critical of the city’s removal of a key evacuation route via an extension of Magnolia Avenue from the report, stating a full assessment of alternate routes was lacking, and didn’t provide adequate details about all the risks involved in taking those routes. The judge also said the report did not provide any investigation into the extent of risk from injury or death for those residents who sheltered in place, as was suggested as a viable option.

HomeFed Corp., the Carlsbad-based developer of Fanita Ranch, delayed the vote by the Santee City Council by several weeks in 2020 when it removed a planned extension to Magnolia Avenue. At the time, HFC said it was doing so to avoid a possibility of a conflict of interest involving an unnamed council member who owned property on the street.

Councilman Rob McNelis owns a house in the vicinity of the extension, and after it was removed, voted to approve the project along with three other members in a 4-1 vote that was opposed only by former Councilman Stephen Houlahan.

Bacal’s ruling was lauded by the head of one of the four environmental groups that filed suit soon after the City Council approved the project. “Growing wildfire risks must not be ignored,” said Van Collinsworth of Preserve Wild Santee, a local environmental advocacy group. “The court’s decision rightly requires the rising risks to be recognized.”

The other groups suing HFC and the city were the Center for Biological Diversity, the Endangered Habitats League, and the California Chaparral Institute.

Jeff O’Connor, vice president of community development for HomeFed Corp., said in an email, “We are reviewing the court ruling and its impact on Fanita Ranch. We are confident that this important project will proceed upon addressing the court ruling.”

O’Connor previously told ECM the ruling means the company must revise the environmental report, a process that would take three to six months before it’s brought to the City Council for public review.

He also acknowledged that Fanita Ranch will go to a public vote for Santee voters as a result of the passing of Measure N in 2020. That proposition requires any development that doesn’t meet the current General Plan to go to a vote of the people.

But more recently, in January 2021, the Council voted to place the Fanita Ranch project on the November 8 ballot this year after Preserve Wild Santee and other groups opposed to the project gathered some 6,200 signatures, far more than necessary, to force the Council to rescind its action or schedule a public vote.

Mayor John Minto said the city won’t likely appeal the judge’s ruling, but wasn’t sure what HomeFed would do.

“They could withdraw the entire application, and if that happens, it takes everything off the table,” he said.

Minto said the city would comply with rescinding the 2020 approvals. “To me it’s not a big deal. We just do what the judge tells us to do. If the judge wants to rescind it, we’ll rescind it.”

The Fanita Ranch development has been in Santee’s plans for decades, and has gone through several changes. Prior to HFC’s current plan, the city approved the building of 1,400 houses on the 2,600-acre site in the northwest corner in 2007. HFC purchased the land out of bankruptcy in 2011, paying about $12 million.

The development firm overhauled the design, creating a project that keeps about 76 percent of the site as open space, parks, a working farm, and a vineyard. In its outreach letter sent to most residents several years ago, HFC said fire safety is a priority and noted the construction involved extensive vegetation breaks and fire buffers as well as ignition-resistant materials, and building a fire station on site.

As to the traffic problems resulting from the addition of about 8,000 new residents, the developers pledged investing in improvements to SR 52 including adding a westbound lane along with a high capacity on-ramp at Mast Boulevard. HFC said it would get those improvements done before allowing any new residents to move into their homes.