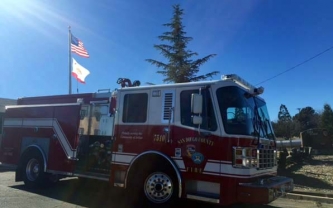 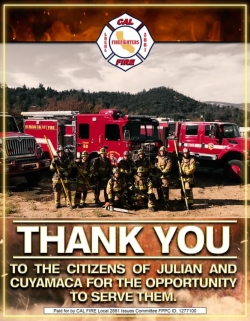 March 19, 2019 (Julian) – The County’s last all-volunteer fire department may soon be history. With 1,294 ballots counted tonight, Measure A is passing with 55.56%, the Registrar of Voters reports.

The measure would affirm a decision made last September by the San Diego Local Agency Formation Commission (LAFCO) to abolish the 35-year-old Julian-Cuyamaca Fire Protection District. Fire and ambulance services would be shifted entirely to the County Fire Authority, under the direction of Cal-Fire.

The Registrar’s office will continue to accept ballots until Friday, if postmarked by today. It is unclear how many ballots mailed out have not yet been returned, or whether there could be enough to make up the 145-vote gap (719 to 575).

Cal-Fire firefighters’ union local #2881 posted on Facebook tonight, “Thank you to the Citizens of Julian and Cuyamaca for the opportunity to serve them.” (photo, left)

For backers of the JCFPD who have fought hard to keep their volunteer firefighters, however, the outcome sparked strong emotions.