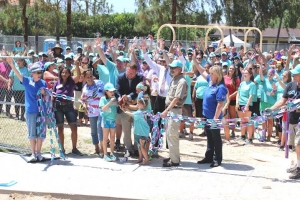 June 7, 2014 (El Cajon) – The City of El Cajon for 150 volunteers to help build a playground Saturday – and got 290. Not only was this one-of-kind customized playground built in one day, it was built in less than six hours. 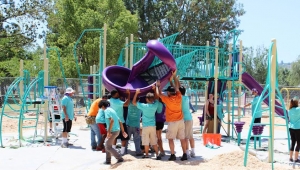 The new KaBOOM Playground at Wells Park will be open to the public beginning Wednesday afternoon. It is located at 1153 East Madison Avenue and will provide youth a new area to play and have fun for many years to come. The park includes elements for all children—including those with disabilities.

El Cajon Councilmembers Gary Kendrick and Bob McClellan took part in the opening ceremony at 8:30 a.m. to welcome and thank all the volunteers for coming out.

The playground, funded primarily by Foresters, was created from personal drawings during a recent special design day held on April 3. Design input came from all ages, children through seniors. KaBOOM! took those drawings and designed this customized playground for Wells Park.  The assembly started at 9:00 a.m. and was completed by 2:00 p.m. with the ribbon cutting held at 2:30 p.m. Taking part in the ribbon cutting was El Cajon Mayor Bill Wells, and Councilmembers Tony Ambrose, Bob McClellan and Star Bales.

Some amazing features about this playground include targeting the area’s special needs population with two unique pieces.

“We’ve installed a swing for individuals that are physically disabled and another playground piece, known as the Cocoon, which is designed to give individuals diagnosed with autism a sense of security,” Monica Zech, spokesperson for the City, said. “Additional features include two, two-bay swings, which means four swings total.” Recent research shows that children under the age of five increase their cognitive ability to read because the action of swinging stimulates those functions in their brain.