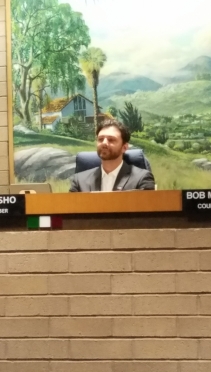 Council grapples with rental bicycle problems, commends volunteer Kathy Pillman for founding group that has cleaned up 6 tons of trash

September 14, 2018 (El Cajon) – Citizens who attended Tuesday’s El Cajon City Council meeting once again saw a circus-like performance in which the public spoke out over the clownish antics of Councilmember Ben Kalasho.

Residents, in public comments, expressed reservations about Kalasho’s fitness as a council member due to a civil lawsuit accusing him and his wife, Jessica, of fraud, defamation, and sexual harassment. Jessica Kalasho is the subject of a bench warrant issued by San Diego Superior Court Judge Timothy Taylor before he recused himself from the case, as first revealed by East County Magazine.

Speaker after speaker called on Kalasho to resign his seat on the Council, a position he has held since 2016. 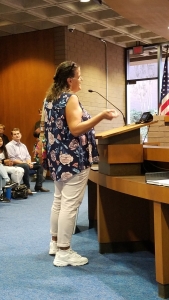 "He's brought enough shame on our city," Lynn Powell-Macklin (right) told the Council. A member of the East County Democratic Club, she said that because of Kalasho’s conduct, the long-running political group came close to losing its charter from the San Diego County Democratic Party.

“I’m a proud progressive Democrat,” stated Powell-Macklin, who said she moved to El Cajon Valley about a year ago. “That means we keep our elected officials accountable. When a slime ball gets under the radar, we don’t double down and turn our backs and pretend we’ve voted in the right person.” She told Kalasho, “We’re glad that you’ve jumped ship,” referring to his reregistration as a no-party-preference voter. “The [Democratic] party was never going to endorse you this time around. This makes it a lot easier.”

Powell-Macklin added that even though Kalasho is no longer a part of the East County Democratic Club, “We will be here as long as you are here to call on you to quit. You’re not a Democrat. You don’t represent us. You don’t represent the citizens of El Cajon. You don’t even represent your own people,” Macklin said, referring to Kalasho’s native-born Iraqi heritage. 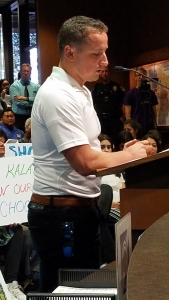 “You don’t even respect our laws,” he said, adding, “The judge in your current court case threatened to put you in custody and called your actions a disgrace by not complying with court orders. You were held in contempt of court multiple times. All this while you’re on probation.” Ortiz cited an exclusive East County Magazine investigation which found that Kalasho had pleaded guilty to violations of workers’ compensation laws in relation to his Santee car wash, formerly named “GO Car Wash” on the 9000 block of Mission Gorge Road. Kalasho recently renamed it to “Car Wash Caffe.”

The finale in the public comments came during testimony by San Diego community activist Mark Lane, who recently filed a federal lawsuit against Kalasho for blocking Lane’s negative comments on the Councilman’s Facebook page.

Referring to members of a civics class from Valhalla High School who earlier introduced themselves at the Council session and mentioned their future career choices, Lane said, “I was fascinated watching these young people come up talking about their goals and dreams. It’s impressive. All I could think was that we had a sexual predator on the dais and what is he thinking while we’re all applauding them.” 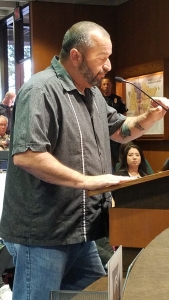 (The official video coverage of the Council meeting does not show Kalasho being served with the lawsuit. However, ECM’s news partner, 10 News, along with other San Diego television news operations caught the moment on video.)

“Ben has tried to dodge the law,” said Lane. “Not showing up to court. Trying to dodge lawsuits getting served on him. He does not have the spinal fortitude to accept criticism. He doesn’t understand freedom of speech….that’s why he blocked me on Facebook because he can’t take criticism for stuff he does. He likes to do it, but he can’t take the criticism.”

Later on in the evening, Kalasho personally released an e-mail statement to 10 News saying:

“The lawsuit today which was served similarly to National City Mayor Ron Morrison, Escondido Mayor Sam Abed last month, and other elected officials alike. The attorney who is bringing these frivolous lawsuits is acting unethical and only looking to line his pockets. Mark Lane, the plaintiff in the case at bar is a known agitator. Mr. Lane does not even live in El Cajon. He is not my constituent. In my case, I didn’t block Mr. Lane but simply exceeded the 5000-friend limit on my personal page. I simply wasn’t allowed to add anymore friends due to Facebook limits. Besides, that’s my personal page. I do have a professional LIKE page which anyone can post to.” 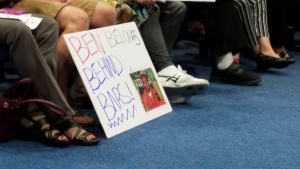 Lane’s legal basis for his lawsuit is a late May ruling by a New York Federal Court barring President Donald J. Trump from deleting public posts to his social media sites.

Rideshare Bicycle Ordinance May Be Coming to El Cajon

The regulation of rideshare bicycles within the city of El Cajon did not draw the attention that was expected.

At the behest of a request made earlier in the summer by members of the  Council, City Manager Graham Mitchell presented a report outlining the growing problem of abandoned rideshare bicycles, a problem which has plagued many other San Diego County cities.

As noted by Mitchell, the dockless bikes system is one where a user can pick-up a bike at the location of their choice and drop it off at any location of their choice. Riders can easily locate, unlock, ride and pay for bikes, usually with a smart phone app. Dockless bikes have the potential to enhance transit connections, reduce vehicle emissions and provide ridership information to help inform transit agencies/operators. However, these systems have proven to create challenges such as cluttered sidewalks and streets, blocked access, and bikes used by unauthorized persons. Local governments have been forced to deal with the impacts of this emerging enterprise. 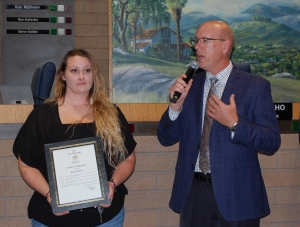 Of all the rideshare bicycle companies which operate in San Diego County, three companies’ bikes are most often seen: Limebike, Ofo and MoBike.

A point in time survey taken on September 11th found in El Cajon 25 rideshare bikes, of which three were locked with GPS tracking devices intact; 22 had  GPS tracking devices disabled. Bicycles have been found without tires, others carved up and utilized as trusses for homeless shelters. The City of El Cajon  has received up to five or six calls a week with complaints of blocked sidewalks.

El Cajon city staff has studied several models of bike regulations as put forth by the City of Coronado, North County Coastal Cities, and large metropolitan areas such as Dallas, Seattle and Chicago. Each of the cities have different approaches.

Coronado allows a bikeshare company two hours to retrieve a bicycle before it is confiscated and impounded, then requires a fine to release the bike back to its owner. North County coastal cities from Del Mar to Oceanside are considering a collaborative approach where one company handles bike confiscations and impoundment. Dallas charges a bikeshare company a fee of $800 to enter the market along with a $21 fee per bicycle. Seattle employs a similar approach but also has a smartphone app which residents can use to report a bicycle which encroaches on a restricted area; Seattle gives two hours for the company to retrieve its bicycle.

The City of El Cajon has determined that its policy options include no action, heavy regulation (such as Coronado’s enforcement model), or a “pilot program” such as that employed by the major metropolitan areas. Mitchell acknowledged that regulatory issues may arise in that Ofo has expressed no interest in retrieving its bicycles left within the city limits.

After preliminary discussion, the Council requested that city staff make a recommendation on how the city should proceed, with a proposed ordinance within a month.

At the beginning of Tuesday’s  session, El Cajon resident Kathy Pillman and her group of volunteers (including Councilman Steve Goble) were recognized for their little pickup initiative, which, after three months, has netted six tons of trash.

Residents interested in participating in the Wednesday night and Saturday morning effort are encouraged to visit the group’s Facebook page at https://www.facebook.com/groups/ECCCUG.