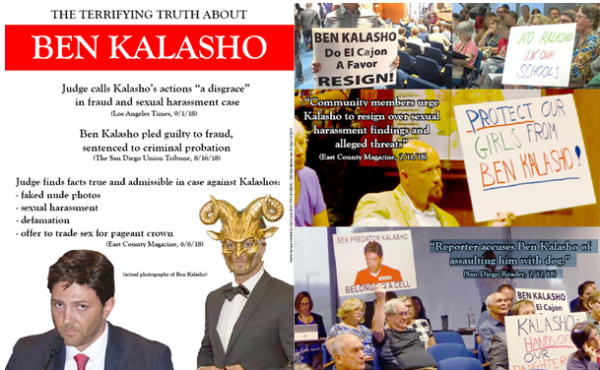 October 9, 2018 (El Cajon)—Jesse Kendrick, son of El Cajon Councilman Gary Kendrick, has filed a police report accusing Councilman Ben Kalasho of twice stalking and harassing him on the campaign trail, including pursuing him some two miles, at times blocking his way.Kalasho is running against Kendrick on the November ballot.

Jesse Kendrick told ECM that on September 28, he was driving a licensed golf cart in Fletcher Hills “distributing flyers warning the citizens of El Cajon of Mr. Kalasho’s gross misconduct in office” when I noticed a black Range Rover driving very closely behind me.” Those flyers were titled `The terrifying truth about Ben Kalasho.’  View call records to police.

Kendrick says he pulled over but the vehicle kept following him, so he pulled into a driveway to turn around when “Ben Kalasho slowed down, briefly blocking me in the driveway. He rolled down the window and shouted at me, accompanied by his wife, Jessica. My heart began to race. I couldn’t see through the tinted windows in his back seat. I had read in the papers about Ben Kaklasho’s violent outbursts with his attack dog, and I has seen videos posted to his own Facebook wherein he trained his German shepherd to assault people. My golf cart has no door or walls. This suddenly felt like a very tangible danger.”

A process server and ECM reporter Paul Kruze have both filed police complaints alleging Kalasho threatened to attack them with the same dog.

Jesse Kendrick says he drove home to protect his safety and the safety of his passenger. “Ben Kalasho followed me very closely, rolling through two stop signs.  I drove around a block to verify that he was not coincidentally driving on the same street as me. No, he was chasing me.  I pulled over to the side of the road several times to allow him to pass. He pulled over immediately behind me. Looking back at Mr. Kalasho, I could see him grinning,” Kendrick says, adding that  Kalasho followed him about two miles, all the way back to his home.  “I filed an incident report with the El Cajon Police Department, incident #18008640,” he says.

Videos posted by Kalasho appear to confirm that he and his wife did tail Kendick, though Kalasho has ridiculed Kendrick on social media for feeling threatened during the pursuit:

Kendrick says the next evening, September 29, he and his father, the candidate, took the golf cart out to distribute a second flyer, this one touting Councilman Kendrick’s record of accomplishments.  “We noticed Ben Kalasho’s black SUV drive past us,” Jesse Kendrick says. “A few minutes later, he idled his vehicle closely behind ours, with his headlights shining into our open-air cart.  At the advice of my attorney, I immediately dialed 911…Knowing Mr. Kalasho had pled guilty to fraud, I also did not trust him to offer an accurate account of events, should he attempt to provoke an altercation.”

Kalasho continued to follow the Kendricks for several more houses.  “Eventually he drove several houses in front of me and parked, almost as though he were anticipating my arrival,” Jesse says. “Before I reached that house, however, he drove off. He turned around and drove past us one more time with his camera pointed at us before leaving.” He added that in his father’s 20 years of holding public office, “this is the first time a member of my family has ever been stalked by a political opponent.”

Kalasho posted questions he received from San Diego Union-Tribune award-winning reporter Jeff McDonald about calls to the police by both Kendrick and a process server in the same week, with Kendrick says Kalasho put him “in fear for his personal safety.”  The reporter asked if these reports were true and if so, “What is your response or explanation for these incidents and is this appropriate behavior for an elected official, why or why not?”

Kalasho called the reporters at the UT “Marxists” and made a derogatory comment about McDonald’s wife.

Jessica Kalasho wrote, “Wft!! Gary Kendrick’s son who was caught putting illegal hit piece flyers under residents floor mats was reported by Fletcher Hllls residents. FPPC is investigating and we caught him on video. But of course sleazeball lying Jeff McDonald twists the story and reports the complete opposite with ZERO evidence! I’m at a loss for words!”

In fact, the flyer passed out by Kendrick’s son, while unflattering toward Kalasho, was not illegal.  In an earlier post, Kalasho had claimed the flyer violated the law by not listing who paid for it.

How accurate is the information in what Kalasho has characterized as a “hit piece?”

Though clearly unflattering, including an actual photo of Kalasho in a horned mask at a masquerade ball, contained accurate statements on Kalasho’s long record of illegal and allegedly threatening actions.

The flyer published actual headlines in the Los Angeles Times, San Diego Union-Tribune, and East County Magazine, along with the dates the articles were published:

Judge finds facts true and admissible in case against Kalashos:

(Judge Timothy Taylor issued a judgment granting a motion to allow documents, a supporting declaration  and all of the admissions above to be admitted at an upcoming civil trial as true facts)

All of these  statements are true and verifiable through voluminous civil and criminal court records which we have linked to in even more detail our previous articles, as well as through City Council meeting videos and other government records.

Reporter accuses Ben Kalasho of assaulting him with dog

Our reporter, Paul Kruze, told police that Kalasho advanced on him with a lunging attack dog while Kalasho laughed, making our reporter fear for his safety in the assault threat.The reporter, who was well known to Kalasho, was taking a photo of Kalasho’s campaign vehicle in a shopping mall parking lot when the incident occurred.  In fact Kruze and ECM editor Miriam Raftery received the Society of Professional Journalists' (SPJ) Gloria Penner award for reporting on Kalasho's threats against others, even before he threatened Kruze with the dog. SPJ issued a statement denouncing Kalasho for threatening and intimidating a journalist.

In his video Kalasho said Kendrick's flyer is full of lies when every part of it is true. That means Bessmon lied -- again. https://i.imgur.com/LLPQNNv.png
Kalasho is obviously unhinged. His tactics in the last few years bear this out. He is a wounded animal who is backed into a corner. Except for this wounded animal, hides behind his dog. His own spouse must have the lowest self-esteem of any woman on the planet. Kalasho's philandering (Or attempts at it) should be enough for her. But, oh no. She stands by her man (?). She obviously thinks that she does not deserve better than that guy. A flawed, awful person has taken his wife down this rocky road of deceit and dishonor. A sad situation overall.