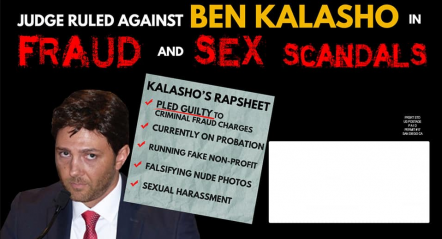 September 15, 2018 (El Cajon) – Redistricting has pitted Councilmembers Gary Kendrick and Ben Kalasho against each other in what’s shaping up to be one of the most contentious election battles in East County’s history. 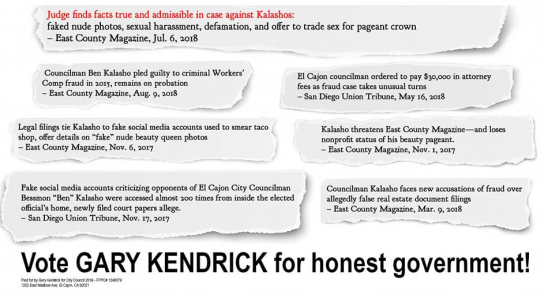 The mailer truthfully states under a headline “Kalasho’s rap sheet”  that Kalasho pled guilty to criminal fraud charges and is currently on probation.

It is also accurate that he ran a “fake non-profit.”  After applying for nonprofit status for the Miss Middle East Beauty Pageant, Kalasho failed to obtain a federal employer I.D. number and after numerous warnings by California’s Attorney General, the state shut down the nonprofit.

The flyer also references “falsifying nude photos” and “sexual harassment.”  These allegations are in civil suit against Kalasho and his wife.  Though the trial is still ongoing, Judge Timothy Taylor found evidence “true and admissible” that the Kalashos conspired to post falsified nude photos online of a pageant contestant with whom they had a business dispute, and that Kalasho sexually harassed pageant contestants.  The judge also deemed true that Kalasho took out multiple fake identities on social media to defame people including pageant contestants, a taco shop owner and an attorney. 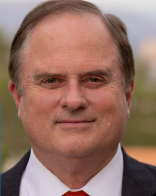 Kendrick (photo, left) has served on the Council since 2002 and chaired the city’s Planning Commission before th

at.  He previously served as president of the Grossmont-Cuyamaca Community College District board and has taught business, finance and real estate classes at community colleges locally.  His key accomplishments on the Council include helping lead efforts to reopen the East County Performing Arts Center, reduce homelessness, bring four-star hotels to El Cajon, and enact legislation to crack down on stores selling alcohol to minors.

Kalasho (photo, right) was elected to the Council in 2016. As ECM previously reported, our factchecking of Kalasho’s campaign literature found he exaggerated his accomplishments by falsely claiming credit for numerous things done by other Councilmembers including Kendrick, including many actions taken before Kalasho was on the Council.

Kalasho's campaign website oddly omits his biographical history. Perhaps he doesn't want voters to know that a car wash he owned resulted in a jury finding of fraud against him, as well as a separate guilty plea on criminal charges of workman's compensation fraud. Or that  a chamber of commerce he runs was forced by the federal government to change its name due to copyright infringement. Or that the beauty pageant he founded and still runs was ordered to stop representing itself as a nonprofit by the state of California. 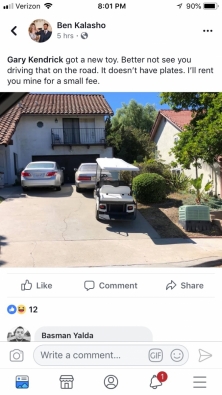 driveway of Kendrick’s home. Kalasho wrote, “Gary Kendrick got a new toy. Better not see you driving that on the road. It doesn’t have plates. I’ll rent you mine for a small fee.”

Kendrick told ECM a friend had dropped the golf cart off just hours before Kalasho’s post. He said he plans to get license plates before using the vehicle for campaigning.  Kendrick added, “I’m flattered that Ben Kalasho is so obsessed with me.” 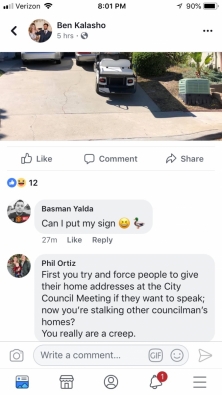 But a reply from Phil Ortiz (photo, right) in response to Kalasho’s post including blistering criticism.  “First you try and force people to give their home addresses at the City Council meeting if they want to speak; now you’re stalking other councilman’s homes?  You really are a creep,” Ortiz wrote.

Kalasho removed the post shortly after it went up.  Here’s a screenshot, as evidence of what he removed.

Interestingly, Kalasho was served Tuesday with a federal lawsuit by activist Mark Lane accusing Kalasho of violating his First Amendment rights by removing posts from those who criticized the Councilman.  In similar suits against President Donald Trump and Sheriff Bill Gore, courts ruled that public officials could not legally remove comments from those they disagree with off sites on which they discuss public policies or campaign issues.

Kalasho has claimed he didn’t block or remove anyone except when he exceeded Facebook’s 5,000 friends limit. He has claimed in the case of Facebook that his page was a personal site. However courts have ruled that even a personal site run by a candidate or public official must protect free speech of others, if the site includes discussion ot political issues.

His removal of Ortiz’ post proves that Kalasho is continuing to remove critical comments from his social media accounts, even on clearly political posts attacking his campaign opponent.

They are individual traits not dependent on Party Affiliation.

Mr. Kendrick is the obvious choice for me, and I certainly hope enough other voters see that Kalasho is a no vote - soon to be a distant memory... I wonder if Kalasho (originally a republican) has a shrine of Donald Trump at his Luxurious home. You know, the one he and his wife live in and 'claim' to be practically destitute? I'm curious because his actions and reactions closely mimic POTUS in many ways. Similarly like Duncan Hunter Jr. holding Donald Trump in high esteem. "Fool me once, shame on you. Fool me twice, shame on me".
Bessmon Kalasho is every bit the dirtbag his egregious actions have proven him to be, but he committed every one of those actions while he was a registered Democrat. Additionally, it is known he attended a San Diego Bernie Sanders rally. Gary Kendrick, on the other hand, has been endorsed by the San Diego County Republican Party because he is the Republican. If either man is a supporter of Donald Trump it is Gary Kendrick the man for whom you say you are going to vote. They are both terrible choices, and I am happy I don’t live within that district so I won’t have to choose between the two.

He was a Democrat since at least 2016 when he ran for office, though we'd heard he was a  Republican at some point before that, and more recently became a decline to state voter, confirmed by the Registrar.  His criminal actions may have come before he was a Democrat and did not come to light until recently because they were under his legal name, Bessmon. However the Democrats certainly did know about his more recent controversies including his pattern of bullying, belittling, and according to the court, sexually harassing people as well as the fraud invovling his nonprofit  and a jury finding of fraud in another case, if they were reading the media accounts and court records.

I don't know if Kendrick is a Trump supporter or not. If he chooses he can weigh in. But I'm curious why Vulcan would say Kendrick is a "terrible choice?" The only forces I'm aware of that he alienated were those supporting the tobacco industry and businesses selling tobacco or alcohol to minors.