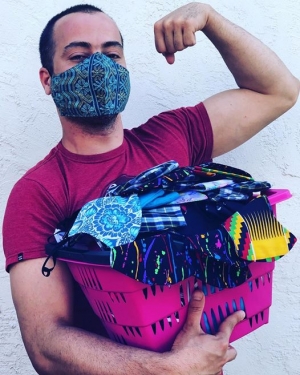 May 4, 2020 (El Cajon) –“Helping other people was the only way that I survived through different rises and wars I went through,” says Kilian Colin, an Iraqi refugee in El Cajon who says he went through lockdowns in Iraq and Syria.  A long-time civil rights and labor activist, he has now started a mask-making campaign that is protecting thousands of the most vulnerable people during the COVID-19 pandemic.
His masks have been sent to protect healthcare workers in San Diego and in cities across the nation including had-hit New York City, as well as to farmers in the Midwest, farmworkers in Oregon, asylum seekers in Mexico, and tribal members of the Navajo Nation in Arizona.
How the effort began
“I was visiting Asia in January when the pandemic started,” says Colin, who began wearing masks in Vietnam and Taiwan.  Back home as a student at San Diego State University, he kept wearing a mask to avoid infecting others.
But he recalls, “Both professors and students at SDSU were making fun of me…I had no option but to face some of those bullies and told them I was protecting them by wearing this mask, since I had no idea if I carried the virus with me home.”
In mid-March, SDSU moved classes online. Without spending an hour daily commuting, Colin decided to make several masks instead and offer them online to whoever needed them, also replacing his own surgical masks that had been washed too many times to be protective.
“I looked online for patterns to make masks and I looked in my closet for clothes that I no longer use,” he tells East County Magazine in an exclusive interview.