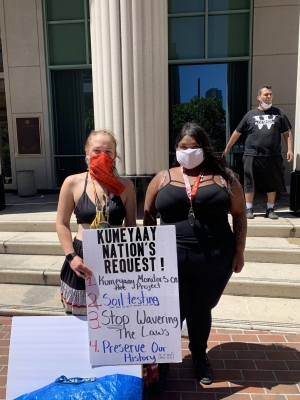 July 6, 2020 (San Diego) - Approximately 200 people showed up in front of the San Diego Hall of Justice downtown Sunday afternoon to protest a border wall being built on sacred Kumeyaay land in East County. The protest was a seated, peaceful protest organized by Warriors of Awareness in conjunction with leaders and elected officials of local indigenous nations.

The protest also received alliance and support from local individuals and organizations such as the Racial Justice Coalition.

Other protests against this project took place earlier this week, including a Monday protest in Campo that halted dynamiting to build the wall, as  ECM reported and a second protest that again stopped the blasting on Wednesday and included chairwomen of three local tribes, CBS 8 reported. 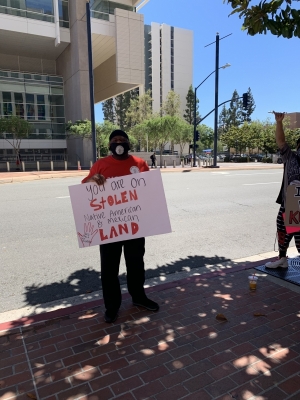 Photo, right: Yusef Miller of the Racial Justice Coalition stands as an ally

The California Environmental Quality Act (CEQA) was designed to protect areas that preserve history and artifacts, but many feel that the federal project oversight committee is not adhering to this law.

Organizer and co-founder of Warriors of Awareness, Cynthia Parada who is also a tribal councilmember (elected official) from the La Posta Band of Mission Indians said the protest was “for the state to uphold the laws that are already made to protect our people and protect our culture. We want to stop waiving those laws …At any time they can say ‘Okay, well we can waive these laws, and not have to listen to them’ and every time it’s OUR laws for OUR people and OUR bones. We soil tested and found bones and they still destroyed it all.”

In accordance with CEQA, a cultural monitor is supposed to be onsite during construction. The Native American nations believe that this person must also be a local Native American i.e. someone who personally knows the cultural significance of the land.

“We want monitors on the rest of the project because that’s actually a law too, when there’s any construction being done on Kumeyaay land that involves grading, blasting, or digging, a Native American monitor has to be there, and they’re still grading and digging without one present,” said tribal council member Parada.

U.S. Customs and Border Patrol has claimed to have a monitor onsite, but failed when pressed by other media to provide a company name or name of any individual monitor. This seemed obscure and suspicious to those who showed up at the construction site earlier this week. 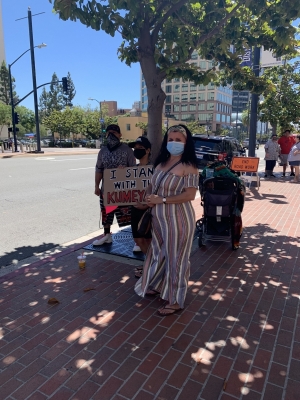 Fellow organizer Brooke Baines from Manzanita mentioned that in most cases, Native Americans and indigenous North Americans were forcibly occupied, meaning that Native American nations should have a hand in the governing and policymaking process yet they continue to suffer and be infringed upon, largely by federal projects.

Parada also noted that her council has reached out to various local elected officials who have never responded or held any time of meetings, “they keep saying they’re going to pass it up the line to their superiors; no superiors have called us. That’s why we’re out here, we’re trying to get political attention, supervisor attention, we just want to be heard and we want things to change. We want to sit at the table with them.”