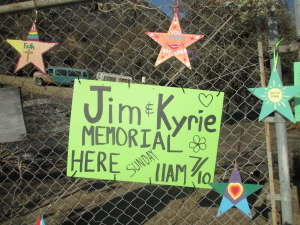 Update July 6, 2016:  The Medical Examiner has confirmed the identity of James Peter Keefe,53 and also confirmed that the second body is that of his wife,but has not released her full name pending efforts to locate her relatives in Canada.

July 3, 2016 (Potrero) –A memorial service is planned for July 10th at 11 a.m. to commemorate Jim Keefe and his wife, Kyrie.  The service will be held at 28020 State Route 94 in Potrero,  the site where the young couple lived.  Bodies believed to be theirs were found by volunteer searchers among boulders 50 to 70 yards behind their home after the Border Fire.

“Let’s get together to honor them, talk to each other about what happened that tragic day, and salute two wonderful people who brightened our lives and made us smile. See their art, tell some stories on the mic, hear some music, walk the property, cry, hug,and laugh,” Claudia Millerbragg posted on the Potrero Town page on Facebook, adding that people should bring chairs.