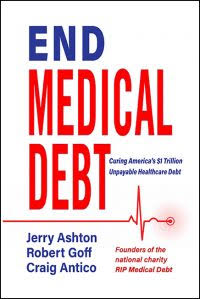 Of all the forms of equality,

Injustice in health is the most

April 6, 2019 (San Diego) - The authors have written a timely and thought-provoking book about healthcare and debt, coming at a time when the Trump Administration is proposing doing away with the Affordable Care Act (ACA), or better known as Obamacare.

Jerry Ashton, Robert Goff and Craig Antico, founders of the national charity RIP Medical Debt, a 501 (c)(3) not-for-profit company based in New York, incorporated in 2014, locates, buys and forgives unpayable medical debt for those burdened by financial hardship. In a phone interview with one of the authors, Craig Antico, he stated to me: “People don’t realize the hardships that medical debt brings.”