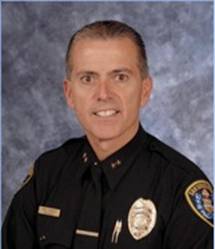 The public is invited to attend. Cost to attend is $15 for Chamber members and $20 for guests with advanced reservations, or $25 at the door. Breakfast will include eggs Benedict, scrambled eggs, bacon, sausage, potatoes, fresh fruit and juice. Prize drawings also will be held. Attendance drawing sponsors include La Mesa Courier and Opus Bank. Reservations may be made via the chamber website, www.lamesachamber.com, or by sending an e-mail, rsvp@lamesachamber.com, or by calling the Chamber Office (619) 465-7700, ext. #2.

Vasquez was sworn in as chief of the La Mesa Police Department in April 2015.

He previously served for 29 years with the San Diego Police Department. He began his career with the SDPD in September 1986 as a police recruit. In 1994, he was promoted to sergeant, then lieutenant in 1998, captain in 2005, and assistant chief in 2013. Vasquez graduated from the FBI National Academy in 2007. In his previous position as assistant chief with SDPD, he oversaw the Canine Unit, SWAT team, property room, information services, communications and the chief’s community advisory boards. Vasquez succeeded Ed Aceves, who retired in December 2014 after three years as chief.

Vasquez is a native San Diegan with long ties to East County. He played Pony League baseball in La Mesa, and he graduated from Helix High School in 1981. He has been an El Cajon resident for about 25 years. He has a bachelor’s degree in business management from the University of Phoenix. He is married with two children.