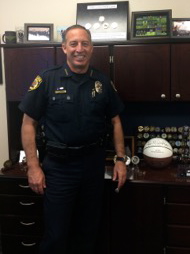 April 12, 2015 (La Mesa) -- On Tuesday, April 14 at 2 p.m., 30-year La Mesa Police Department veteran and outgoing Police Chief Ed Aceves will “walk out” in what has become a traditional retirement ceremony at the La Mesa Police Department. Though officially retired in December 2014, he stayed on until his replacement, Chief Walter Vasquez, had a week to transition into the job.

In an ECM exclusive, Aceves shares how he got into law enforcement, how technology and communications have changed the field, his most memorable moments, and his plans for the future.