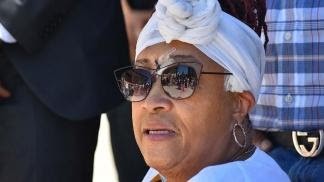 March 5, 2021 (La Mesa) - La Mesa Police Department’s (LMPD) review has concluded that Detective Eric Knudson should not be disciplined for firing a less-lethal weapon (a beanbag from a shotgun) during a protest outside the police station on May 30, 2020.  The beanbag struck protester Leslie Furcron in the forehead, causing serious injury.

According to LMPD, “The Department based its decision on the totality of the circumstances, an independent review by a qualified expert in the areas of use of force and less lethal munitions (R.K. Miller, National Training Concepts), and the absence of any significant violation of Department policies.”

The decision comes after the San Diego County District Attorney Summer Stephan, on January 5, issued a written analysis and conclusion determining that Detective Knudson’s actions did not warrant any state criminal liability.

The D.A. investigation concluded that Furcron had thrown a beverage can at a time when other protesters nearby had hurled rocks, bottles, and a burning Molotov cocktail (bottle bomb) toward the police station. The investigation found the firing of a beanbag round defensible under the circumstances.

LMPD policy prohibits aiming non-lethal weapons above the torso. However, the substantial distance and Furcron stepping forward moments before she was struck, as seen on body camera footage, may have affected the accuracy of the shot.

The city and Detective Knudson still face potential liability, however. A civil lawsuit was filed on Furcron’s behalf on December 8, 2020 in Superior Court against the City of La Mesa and Knudson. Furcron suffered skull fractures and loss of vision in one eye. Her suit contends that she was too far away to pose harm to officers by tossing the can of Red Bull, an energy drink.

She was one of several protesters injured by police firing non-lethal weapons as the protest turned violent on a night that ended in a riot. Three buildings, including one of significant architectural heritage, were burned down, and dozens of other businesses looted.

Police Chief Walt Vasquez resigned shortly after the incident. The City has since established a citizens’ police oversight review board and commissioned an independent review on the City’s response to the riot.