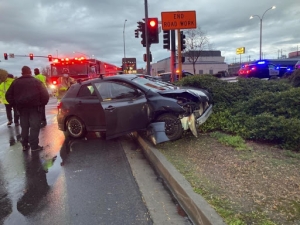 March 10, 2021 (La Mesa) -- Early this morning, La Mesa Police officers responded to a collision involving two vehicles near the intersection of Baltimore Drive and Fletcher Parkway. The first officer on scene identified that the driver had overdosed on an opiate and immediately administered NARCAN, saving his life.

The driver was transported to the hospital for medical treatment.

All La Mesa Police officers are issued NARCAN so that citizens suffering from an overdose can receive this life saving treatment as soon as possible.

The other involved vehicle had only minor damage and the occupant thankfully did not require medical attention.

Heartland Fire and AMR also responded to this collision.