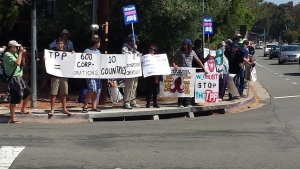 May 8, 2014 (San Diego)-- Labor and community groups lined the streets outside a fundraiser featuring President Barack Obama today to protest the pending Trans-Pacific Partnership (TPP) Free Trade Agreement, a pact they say threatens to ship California jobs overseas.  The Democratic fundraiser was held at the home of Irwin Jacobs, founder of Qualcomm, a high-tech company that already does much of its production overseas and has been lobbying for the TPP.