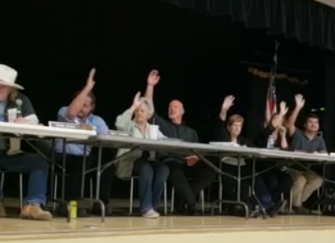 November 1, 2018 (Lakeside) --The Lakeside Community Planning Group has voted unanimously to oppose the Environmental Impact Report (EIR) for a massive sand mining project proposed by El Monte Nature Preserve LLC, the deceptively named company that wants to mine sand on the 479 acre site for the next 12 years in Lakeside’s El Monte Valley. The decision drew applause, cheers and hugs from the large crowd present.  View video of the LPCG meeting by Billy Ortiz.

Meanwhile, opposition to the project is growing – and serious questions over the property owner’s ethics are being raised.

Lakeside River Park Conservancy’s board has voted to oppose the project.  The board approved a $35,000 donation to Cleveland National Forest Foundation to hire Shute Mihaly Weinberger, attorneys, to write the official 'legal' CEQA comments on the project. “This letter is intended to be the basis of a lawsuit, should the Board of Supervisors approve the project,” a message on the LRPC’s website states.

The San Diego River Park Foundation also held a hearing on the project, where area residents spoke passionately against the project.

Bobby Wallace, a member of the Barona band of Mission Indians and activist who organized supply caravans for the Standing Rock pipeline protests, called it “outrageous” to believed so much earth removal could e monitored for cultural resources “scattered all around.” He voiced concerns over sacred Native American sites as well as destruction of habitat for wildlife.

Many voiced concerns about spores in the soil that can cause Valley Fever, among other health concerns raised.

“We believe we’re being raped by a deep pockets corporation,” said Jeff Newman. “I have COPD (chronic obstructive pulmonary disease) and emphysema. That’s going to affect my life in a big way.”

Jack Shu, president of the Cleveland National Forest Foundation, noted, “We’ve already lost 95% of the riparian habitat in this county” adding, “The river can’t take this, year after yare after year.” 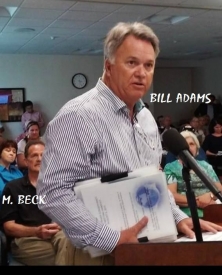 The City of San Diego has submitted a letter to County Planners objecting that the EIR omitted key information and raising concerns over impacts on city water rights and water quality.

A  Union-Tribune article in 2006 detailed how Adams, then operating Eco-Soils along with Max Gelwix, made hefty donations including $40,000 to Perfect Wave,  which was cofounded by Gelwix and c-owned by Brett Wilkes, a coconspirator in the Cunningham bribery case.  Perfect Wave also made donations to a PAC for Delay accused of making illegal donations to Texas politicians.

Nita’s research, documented on her Save El Monte Valley Facebook page,  also found that Adams and Eco Soils were sued in a class action lawsuit for securities fraud. The U.S. Securities and Exchange Commission revoked Eco Soils securities registration in 2007 to protect investors, noting that the company had declared bankruptcy in 2002 and was delinquent in its filings.

“This is the kind of businessman the county planning department reviewing the EIR is trusting to respect the law when it comes to sand mining in the valley and the mitigation process, while the county failed miserably to hold him accountable for the destruction of the valley 20 years ago!” says Nita, referencing a prior incident in which Adams reportedly engaged in unpermitted mining in the valley.

Last month, a contractor hired by Adams was found digging a 22-foot-deep excavation at the site without a permit, though the county contends since the hole was filled in, a permit wasn’t needed—a fact some critics dispute.  Nita has accused a crane operator of pushing her and a video by Ortiz showed the operator threatening Nita stating he would “touch her with the machine” if she didn’t move off the site.