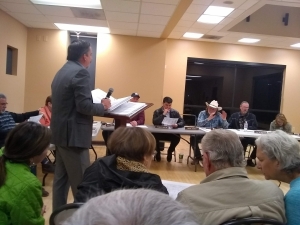 By Mike Allen
Photo:  County planner Noah Alvey speaks to board.
February 22, 2019 (Lakeside) -- A special meeting of the Lakeside Community Planning Group called Feb. 20 to discuss proposed changes to the county’s zoning code turned into a venting session by residents who say the changes will destroy the unincorporated area’s rural character.

The planning group had been asked by the county to weigh in on the proposed code changes that would generally allow for higher density construction on residential lots, but residents weren’t buying into the plan.

The county Planning Commission has already approved the revisions, and the issue will go before the Board of Supervisors for its approval on Feb. 27. 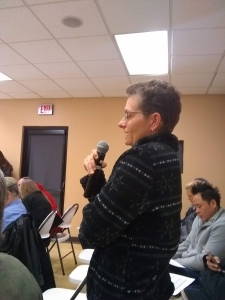 “I don’t understand why this (community’s General) plan exists if these new rules are adopted that will basically tear this plan to shreds,” said Jitka Parez (right), tearing the printed copy of zoning changes for dramatic effect.
Parez added, “There’s no infrastructure that corresponds to the density you want to impose on the area. All this extra density in this area without infrastructure and without proper parking (spaces) to prepare for it is simply mind-boggling!”
Two county planners opened the meeting by responding to a series of questions from the planning group on a range of items that are being changed. They said the revisions were being made to conform to changes mandated by various new state laws intended to increase the stock of affordable housing stock.
Jurisdictions across the state are being scrutinized much more closely regarding meeting affordable housing goals in the face of a housing shortage that has pushed up prices and rents to critical levels. Housing is being built but the product is usually the luxury and moderate type, not for low income or very low income people.
Among the prime mechanisms the county is using to increase affordable housing is removing restrictions and fees associated with building accessory dwelling units, better known as ‘granny flats.’
At first blush this would appear to be a no-brainer solution everyone can endorse, but in diving into the changes being proposed, LCPB members and residents at the meeting voiced deep concerns.
Planning Group Chairman Brian Sesko asked county planners about a section in the revised code that allows for a rounding up to the next whole number of permitted units but also included language allowing for building either duplex or triplex units.
Sesko provided a potential example of a 10,000 square foot lot where a single family unit exists, and asked if an owner wished to build a duplex could that structure be permitted, and processed by the county without it coming before the planning board for review. Noah Alvey, a county planning manager, answered that it could, “as long as (the new building) conforms to the General Plan.”
Gordon Shakelford, another Lakeside resident, noted that the language in many of the revised sections was ambiguous, and could be interpreted to allow a builder to erect a much higher number of units than is currently allowed.
Citing a recently reviewed project by the local planning board, he said the newly revised section would allow an 18-unit project to grow to 36 units. Such a project could also bypass the planning board’s review, and get the necessary permits without anyone on the board or the public knowing, he said. 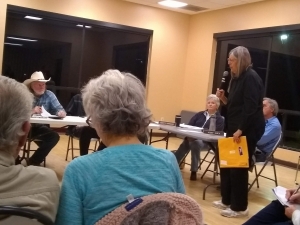 Janis Shakelford (left) hammered home the effect to the revisions, and asked about whether a condo development could be allowed on a conforming lot site without being reviewed by the planning group, and was told it could.
“Basically, we’ve lost single family (development) in our community if this ordinance changes,” she said.
Several speakers groused about higher density projects that lack sufficient parking, and how that affects surrounding streets. The type of development being pushed by elected officials in Sacramento downplays and ignores the reality of parking needs, several speakers said.
Scott Alvey, a planning board member, said much of the code changes were being driven by the kind of construction that occurs in much denser cities such as San Francisco, and has no connection to the Lakeside community.
Sesko said the revisions will result in even more cars clogging the area’s already overburdened and constrained streets. “The new rules the county is imposing on us will make this community one big parking lot.”
Parez chimed in again on potential negative consequences from the revisions. “I see a disaster coming from all these changes. This area has not been urbanized, and now all of a sudden you want to burden (the community) more without new facilities or code enforcement?”
Alvey made a motion to send a letter to the Board of Supervisors stating that the revisions were not consistent with the Lakeside General Plan, and suggesting three specific changes: opposing the rounding up on possible new housing units; making setbacks on any new development at least five feet; and opposing the density bonus.
The motion passed by a 9-0 vote.

Now that the Mayor of San Diego, Sheriff of Los Angeles and the Governor of California are making this a Sanctuary State, the question of housing needs to be directed at "who" and "where from" those people are coming from, to generate this issue. I don't want to add to any of our properties to facilitate "illegal" aliens that are homeless and immediately become voters.