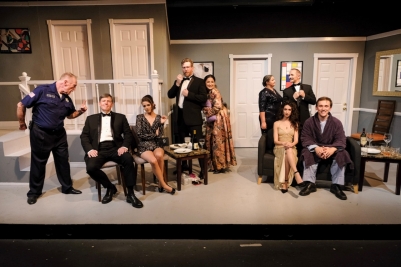 By Kathy Carpenter
April 12, 2022 (La Mesa) - Lamplighters'  "Rumors" is a classic farce.  A farce is defined as a comedy that seeks to entertain an audience through situations that are highly exaggerated, extravagant, ridiculous, absurd and improbable. With lots of doors, comings and goings and people impersonating other people. An evening of fun and laughter.

Neil Simon does not usually write farce. This was his first.  Working was cathartic for him.  Thus, he threw himself into this farce. A ridiculous comedy to focus on. "Rumors" premiered in San Diego at the Old Globe Theatre in 1988. It's been around a while but chances are, you haven't seen it recently. This is a great opportunity to watch this outrageous play for the first time or revisit and recapture the fun.

The show is set in 1990 in the well-to-do home of Charley and Myra Brock, who are hosting a dinner party to celebrate their 10th wedding anniversary. When the first couple, the Gormans, arrive, they find the host Charlie shot himself, his wife Myra, is nowhere to be found, the kitchen is filled with uncooked food, but no staff. Being a friend, Ken Gorman is reluctant to call the police. Charley, the host, is the Deputy Mayor of New York and attempted suicide won't look good. It's suspected he took some valium before he shot himself, missed and shot his ear.
The fun comes in as the other dinner guests arrive. Each with their own quirks.  At first, the Gormans try to hide what happened, as they know. But by the second act everything has been spilled. When the police show up, they work together to come up with something plausible. The show is loud, chaotic, implausible and pure escapism.
O.P. Haddock directs nine incredible actors who take us to this exaggerated realm of one of a kind comedy. Eric Trigg plays Ken Gorman, a well-spoken attorney, Andrea Roebuck plays his elegant wife Chris, both a bit excitable. Marley Bauer plays Lenny Ganz, an accountant who wrecked his brand new BMW on the way to the party. Kellen Trigg plays Claire Ganz, the gossip of the group. Brendan Macneil takes on Ernie Cuswak, the smug psychiatrist. Anna Poteet plays his wife, Cookie, the host of a cooking show.  Not the brightest tool, with a bad back. Steve Jensen as Glenn Cooper, a suave man running for state senate.  His wife Cassie is played by Lakesanne Deal, the jealous type who believes in the power of crystals.  The cop is played by Joe Zilvinskis, a veteran who is about to retire.  A robust cast of characters. 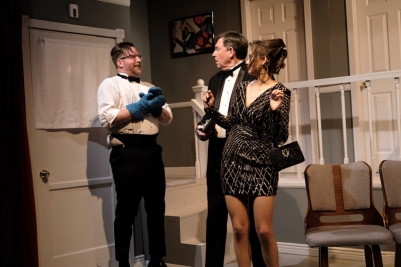 The costumes of the women are totally upscale sequin dresses.. Absolute stunners. Any of which you could find me in.  However, the sixty year old Russian dress worn by Cookie was the star. Absolutely gorgeous.
Come for the story, come for the acting, the character, or the costumes. But this is a show you won't want to miss.
Lamplighters Community theater
Rumors
April 8 - May 1, 2022.
La Mesa
www.lamplighterslamesa.com
Red Jasper
5/27 - 6/19, 202