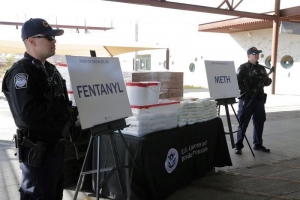 The drugs were found by a drug-sniffing dog in a vehicle attempting to cross into the U.S. through a port of entry. Though President Donald Trump has called for a border wall in part to keep out harmful drugs, a wall would not prevent the vast majority of drugs smuggled in through ports of entry.

The truck, driven by a 26-year-old Mexican national, had over 400 packages of drugs hidden in a floor compartment beneath a trailer filled with cucumbers.
Nogales Area Port Director Michael Humphries praised his staff for their dedication in making the record-breaking drug seizure and arrest made during the government shutdown, when agents were unpaid. “Opioids pose a real danger to every community in America and are having fatal consequences across our nation,” he said. “This past weekend our CBP officers were able to stop an enormous amount of these deadly narcotics from hitting our streets.”
The driver of the vehicle was arrested and turned over to Homeland Security Investigations. He is charged him with two counts of possession with intent to distribute and is currently in federal custody.

Nasty stuff! This synthetic drug (opioid) which was developed for medical pain management, is up 100 times stronger than Morphine! Drug dealers often 'cut' this into Heroin to give their product a boost in strength. Problem is, too much can result in an overdose, or death for the user. Then there's the serious safety situation for police and other first responders who may inadvertently come into contact with Fentanyl. This is the reason they carry Naloxone (Narcan) with them, and yes, some have had to be treated in the field with it to counteract an accidental overdose after coming into contact with this insidious drug! One more thing these brave people shouldn't have to worry about.