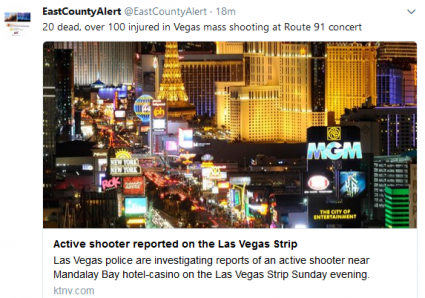 Update 8:15 a.m.:President Trump issued a statement calling for prayers for victims and their families, adding, "We call upon the bonds of citizenship, the ties of community and the comfort of our common humanity. Our unity cannot be shattered by evil. Our bonds cannot be broken by violence. And though we feel such great anger at the senseless murder of citizens, it is our love that defines us today and always will forever.” President Trump and First Lady Melania Trump will visit Las Vegas on Wednesday.
Update 7:30 a.m.:   The death toll has climbed to 50, the Los Angeles Times now reports, with over 400 people transported to hospitals. This is now the deadliest mass shooting inn U.S. history. The suspect is identified as Stephen Paddock of Mesquite, Nevada,  ABC News reports. Other hotels now believed safe; rumors of explosives arose from police use of them at Mandalay to access shooter's room.
For families looking to locate missing loved ones,call 1-866-535-5654.
By Miriam Raftery
October 2, 2017 (San Diego) 1:45 a.m. - A horrific mass shooting has just occurred in Las Vegas.  Police confirm that at least 20 people are dead and more than 100 injured, many seriously. The shooting occurred at the Route 91 Harvest country music concert outdoors across the street from  the Mandalay Bay hotel.

The shooter, who shot from a hotel window at the Mandalay onto the crowd below with what audiotapes suggest was a fully automatic  military-style weapon, is now dead. Authorities also found 10 "assault" weapons in his room, Las Vegas authorities told media.

Police are reportedly looking for a "companion" named Marilou Danley, described as an Asian woman 4 ft. 11 inches in height and a second woman for whom no description has been provided.  They are also searching for two vehicles: