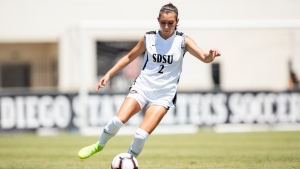 August 30, 2019 (San Diego) - The San Diego State women’s soccer team was called for a foul in the box, which led to a successful 80th minute San Francisco penalty kick and a 1-0 loss on Thursday night on the Sports Deck.

USF’s Sydney Cooper was fed the ball at the midfield line and drove down the left side.  Sarah Broacha, who started the play behind the ball, sprinted to the side of Cooper and made a sliding tackle in the box.  It looked like a perfect play, but the referee, who was trailing the action, called a penalty on Broach and put Cooper on the spot with a chance to break a 0-0 tie.

Cooper fired the penalty kick low to her left.  SDSU keeper Brooke Lisowski made a diving save attempt, but the ball slipped under her glove and into the back of the net for what turned out to be the game-winning goal.

The teams played a closely contested game both on the field and on the box score.  USF (2-1-0) outshot the Aztecs 12-to-11, including 5-to-3 in shots on goal, but the Aztecs had the more dangerous chances, all of which came in the second half.

San Diego State (1-2-0) had the games first good opportunity to get on the board.  Ariana Robles collected the ball on the right side of the offensive zone and slid a beautiful through pass to Malia Kaleiohi about 14 yard.  Kaleiohi turned and fired a shot which USF keeper Olivia Camera stopped at her line.

The other two good chances came in the 84th minute.  Taylor Moorehead, coming of the bench had a couple of chances from the right side of the box.  The first sailed wide right and the second looked to be heading into the goal, but Camera punched it over the crossbar.

Other than the goal, USF also had two dangerous chances.  Four minutes before the penalty kick, Miciah Madison blasted a shot off the crossbar from a tough angle on the left side of the box and in the first half, a shot from the top of the 18 was sailing toward the goal, but Lisowski pushed it up and over the crossbar.

Lisowski (1-2-0) had four saves but took the loss.  Kaleiohi led the team with a season-high four shots, and two on goal.  Moorehead had two shots, with one on frame.  Phoebe Leitch, Chloe Frisch, Laura Fuentes, Kiera Utush and Jessica Sanders attempted one shot each.

USF’s Madison led her side with four shots and Camera (2-1-0) made three saves in earning the victory.

“We’ve looked at the video and it appears that Sarah (Broacha) hit the ball with her right foot,” said head coach Mike Freisen. “It popped back out and she hit it with her left foot, so I felt like she did everything in her power to make the right play.  It’s just disappointing that that (the penalty kick) was the result.

“The hard part for us right now is that we are missing a few players being in form.  Taylor (Moorehead) has been battling health issues for the last six months and hasn’t been able to compete at the level we feel she is capable of.  I thought she performed at that level tonight.  I thought Florence (Laroche) was really good.  She was dangerous…attacking and we need her to get to the level we believe she can be.  We’re just missing some pieces up top, due to injury, that will help us to get better and better as the season goes on.”

The Aztecs’ four-game homestand comes to a close on Sunday when SDSU welcomes Cal to the Sports Deck.  Kickoff is scheduled for 12:00 p.m. and the first 100 fans will receive a free SDSU/Mountain West t-shirt.