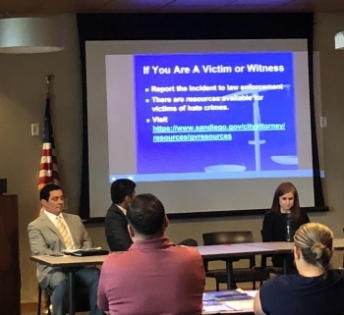 July 18, 2018 (El Cajon)— Sheriff’s Captain Marco Garmo became the victim of a hate crime at a young age, along with his father, who was savagely beaten over a mistaken ethnic identity during a robbery at the Garmo family’s convenience store in El Cajon.

“The reason why we’re having this out here in the city of El Cajon is that it has the largest influx of refugees and immigrants from the Middle East, and we feel like they need to be educated as to hate crimes,” he said, adding that law enforcement believes hate crimes are under-reported by those who are victimized.

Captain Garmo emphasized, “We want them to know that…they have the support of law enforcement as well as the prosecutor’s office. We want to build their trust and the relationship with them, so they call us.”

Garmo’s jurisdiction includes unincorporated areas of El Cajon such as Rancho San Diego, as well as other areas such as Jamul, the City of Lemon Grove, and unincorporated La Mesa.

Approximately 50 community members attended the community forum on hate crimes that took place Tuesday at El Cajon’s new police department seminar room at 100 Civic Center Drive. The hate forum was hosted as a collaborative event between the San Diego Hate Crimes Coalition and the El Cajon Police Department and was oriented toward the Middle Eastern and Muslim community. El Cajon hosts the second-largest number of immigrants from the Iraqi Diaspora and is also home to a new influx of Iraqi and Syrian refugees who are resettling in the United States.

In fact, the Union Tribune reported that 10,000 Syrian refugees had come to the U.S. as of 2016, under the Obama administration. Refugee number 10,000 settled in El Cajon. Hundreds of Syrian refugee families have settled in East County.

Garmo believes the low number of reported hate crimes may be due to victims not coming forward. “The reason why we are hosting this forum out here today is because we feel there are incidents occurring, but they’re underreported,” said Garmo.

This may be due to both fear of law enforcement and language barriers.

There are three Arabic speakers at the San Diego County Sheriff’s Department, and one officer who speaks both Arabic and Chaldean at the El Cajon Police Department. Although there is representation, the numbers seem a bit low given the Arabic-speaking populations in these communities.

“It’s difficult to recruit from the community,” said Garmo, “part of the same problem that we’re having with them reporting crime; law enforcement isn’t a job that’s well looked-at as a career in those countries, either, so we have to get over that barrier…We do have translators and we do a lot of community outreach in the Middle Eastern community.” 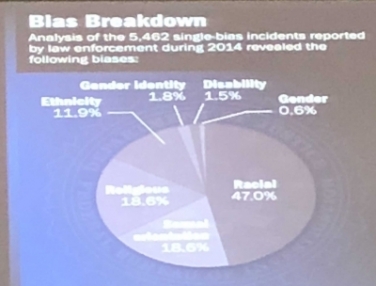 Garmo himself hails from a Middle Eastern background – his father is a Chaldean Iraqi and his mother is an Israeli of Palestinian origin. He was a victim of a hate crime at the age of 12 when two men broke into his father’s small convenience store, beat his father, robbed them and cursed his father as being an “effing Iranian.”

This occurred during the Iranian hostage situation when there was backlash against the Iranian community. In addition to their inexcusable violent behavior, the attackers were also grossly misinformed about their target.

Garmo’s personal experience led him to support community initiatives to combat hate crimes among people of all nations and backgrounds.

“There has to be an intent to cause some kind of harm, other than psychological,” said Tenorio later adding, “It’s not quite clear always what is protected speech and what’s not.”

He then proceeded to give the audience examples of ambiguous issues that may or may not be considered free speech, such as swastikas drawn on a garage.

“If this is a Jewish family, most likely this is a hate crime,” said Tenorio.

The meeting was interrupted by an unknown woman, who barged into the session demanding that the forum offer accurate representation for all groups who are victims of hate crimes instead of focusing on just one. The woman, who arrived late and immediately interrupted the forum, neglected to hear the portions which focused on LGBTQ+ hate crimes and hate crimes and threats against Caucasians. Although she was told to save her questions for the end of the forum, she continued to interrupt the speakers at the podium with an irate tone of voice.

“Excuse me, for many of these refugees, this is their first time in a police station,” interjected Dilkhwaz Ahmed, founder of the non-profit organization, License to Freedom which focuses on the rights of domestic violence victims and general issues pertaining to the local Middle Eastern community.

Ahmed was attending the event as an Arabic translator for approximately half of the audience, in an effort to provide awareness of their rights in the United States and how to report a hate crime.

Among the 50 attendees, approximately 25 were recently arrived refugees who had limited English. Many wore hijabs, or head scarves, reflective of their religious affiliation, an article which often makes Muslims targets for Islamophobic groups.

The refugees and other members of the audience were visibly upset by the unknown woman’s interruption. Many tried to subdue her, but she was eventually escorted out of the premise by Lieutenant Walt Miller of El Cajon Police Department, though she complied with the Lieutenant’s request. Some audience members also openly asked her leave as she was being escorted.

Other issues addressed topics like the Fair Housing Act, to educate audience members of their rights as potential homeowners in the United States, as well as identifying potential threatening individuals by tattoos and symbols, bias breakdowns, and what to do as a victim or witness of a hate crime.

If you are a victim or witness of a hate crime, please report it to your local law enforcement agency such as the Sheriff in unincorporated areas of the County or El Cajon Police in the city of El Cajon.  Also see the County District Attorney's website with resources for victims of hate crimes at  https://www.sdcda.org/helping/hate-crimes.html, or in the city of San Diego check the City Attorney's hate crimes page at  https://www.sandiego.gov/cityattorney/resources/gvresources .

Can and often does, go both ways. I've experienced it myself. It's not exclusively white people against others. Any form of this is totally unacceptable for sure, and we all must learn to get along with one another no matter our ethnic origin.