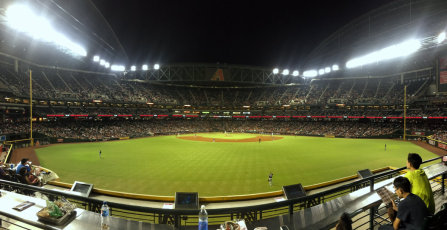 September 30, 2016 (Phoenix) - The Padres ended September and their season in Phoenix.  It’s bittersweet.  Jaxon Shipley started for the Dbacks against Edwin Jackson for the Padres.

The Dbacks started the scoring with a Wellington Castillo single that scored Jean Segura and the Dbacks led 1-0.

In the third, Paul Goldschmidt hit a two-run knock and the Dbacks extended their lead to 3-0.

Ryan Schimpf got the Padres back in the game in their half of the third with a two-run homer and the score was 3-2.

Manuel Margot finished the job in the fourth with a double that scored Luis Sardinas and the game was tied at three.

But that effort was in vain as in the sixth, Chris Owings hit a two-run homer to give the snakes a 5-3 lead.  They'd cruise to the end with that score and take game one.

Game two is much earlier, at 5:10 p.m. Archie Bradley will pitch for the Dbacks against Clayton Richard.