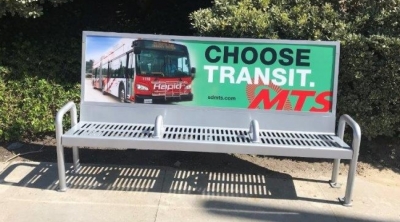 An agreement with the Metropolitan Transit System (MTS) to take over ownership and maintenance of Lemon Grove’s ten bus shelters and 18 bus benches was approved by a vote of four to one, with Councilmember Liana LeBaron voting no.

“This partnership will delegate all trash duties, graffiti mitigation, and structural maintenance of all bus shelters and benches in the City to MTS,” read Mike James from the staff report on the issue. “This will allow city staff’s time, materials, and resources to be allocated to other priorities.”

The contract is for ten years with an option for termination with one year’s notice, and will allow MTS to install digital advertising on the furniture. James projected that the plan will save the City $3,892 per month, allowing Transportation Development Act funds to be repurposed towards street repairs, while also reducing City liability and refreshing its appearance.

Also approved by a vote of four to one with Councilmember LeBaron voting no was an agreement awarded to Rick Engineering to oversee the replacement and maintenance of aging pipes at eight Lemon Grove locations. The project is budgeted for up to $534,000 and has been deemed a priority project in the 2017 Sanitary Sewer Master Plan.

Lastly, the distribution of City Councilmembers across the commissions, boards, and committees they sit on remained unchanged by a vote of four to one.

Councilmember Liana LeBaron requested that she be reassigned to the School District Collaboration Committee, Metropolitan Transit System, or SANDAG. The request was met with concern from Councilmember Jennifer Mendoza about LeBaron’s attendance track record with one of the seats she currently holds as the Helix Water District Water Representative.

No changes were made, with Councilmember LeBaron casting the sole no vote. However, Mayor Raquel Vasquez proposed they revisit the matter in six months’ time for potential reassignments.