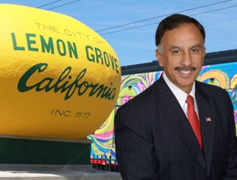 November 7, 2019 (Lemon Grove) – Lemon Grove Councilman Matt Mendoza resigned Monday after moving to Florida due to his work for Boeing.  The Council will meet tonight in a 6:30 p.m. public session to discuss options for filling the vacancy. The  Council originally planned a closed-door meeting but changed to an open session after the San Diego Union-Tribune raised questions about the legality of a closed-door process, the newspaper reported.

The resignation comes at a critical time for the city, which has been forced to dip into its financial reserves.  An initiative to raise sales tax by three-quarters of a cent has just qualified for the ballot – a measure that Mendoza, a conservative, has said he supports.  He told the Union-Tribune that his greatest regret has been the inability of the city to attract enough new businesses to attain fiscal stability. The city has even faced calls from some to consider disincorporation, or giving up cityhood to revert to county control.

Mendoza’s departure comes just weeks before a December 19, 2019 jury trial in a lawsuit against the city of Lemon Grove and Counclman David Arambula is set to commence.  Judge Richard Whitney authorized Cory Briggs, attorney for plaintiff Chris Williams, to take a deposition from Mendoza but so far, Mendoza has been unavailable for that deposition, Candid Chronicle reports.

Wlliams is founder of Candid Chronicle, a publication on the cannabis industry. Williams suffered serious injuries after visiting Arambula’s home  in July 2017 to discuss Wiliams’ marijuana dispensary permit applications. Williams and a witness have said Williams was invited for that purpose, though Arambula has disputed that.  An altercation ensued that resulted in Williams suffering a concussion,fractured ribs, bruises and bite marks. He was treated in an emergency room and has accused Arambula of assault. Arambula has claimed self-defense.  Arambula told ECM that he Mayor Racquel was present early in the evening and that he called her later after the physical altercation.

Mendoza has stated that he was kept in the dark initially about the incident until he read about it in the Union-Tribune. He reportedly was not informed about the severity of Williams’ injuries, was not shown the sheriff’s report nor told that Williams had applied for several dispensary permits. According to the Candid Chronicle, Mendoza said, “The whole thing stinks.”  He has been critical of city officials whom he claims hid key facts from his.  “Mendoza requested an internal investigation be done by James Lough, former city attorney, and city manager Lydia Romero,” the Chronicle states.

ECM has left messages for Mendoza and Briggs requesting comment and also asked Mendoza or copies of his investigation requests, but we have not received a response.

Williams praised Mendoza for holding “integrity in high regard,” but questioned the timing of his resignation with a deposition pending. The city’s lawyers have reportedly fought against having Mendoza deposed.

Mendoza has served on the Council since 2016 and his term was slated to end after the November 2020 elections.

Mayor Vasquez praised his service and focus on the “financial security and health of our city,” according to the Union Tribune.

Mendoza told the newspaper that the city needs strong leadership to restore fiscal responsibility, adding, “I hope the next person for the next four years who comes in knows they are going to be very important.”