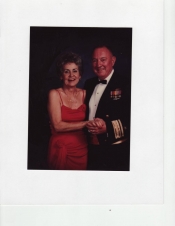 The library's community room will officially become the Rosemary Putnam Community Room, a name that will travel to the new joint use library planned for the campus of Lemon Grove Middle School.

Mrs. Putnam was a founding member of the Friends of the Lemon Grove Library and its fearless leader for nearly three decades. She has sorted thousands of books for book sales that have raised tens of thousands of dollars for books, furniture, equipment and programs in the Lemon Grove Library. She was instrumental in establishing the highly popular Friends Book Store at the south end of the library (the town's sole book store--and a source of new and used book bargains galore).

She and her late husband, Rear Admiral Ira Dwight Putnam, raised three daughters in Lemon Grove and she still resides in their historic, Tudor Revival home designed by British architect, Frederick C. Clemeshaw, and built by the Scottish carpenter, George Simpson, in 1926.

With the grit and determination of a two star admiral's wife, she has pulled her little red wagon along Broadway, selling soft drinks and gathering donations in support of Lemon Grove's new library and later served on the library planning committee. She presently serves on the Independent Citizens Oversight Committee on Proposition W bond monies, which will build the new library.

She is a past president of Soroptimist International of Lemon Grove, past president of the Mt. Miguel PTA, Girl Scout leader, host of foreign exchange students, past wedding coordinator at Lemon Grove Methodist Church, volunteer for the Navy Wives Speech & Hearing Clinic, past board member of the Lemon Grove Chamber of Commerce and former program vice president for the Lemon Grove Historical Society. She established Rancho Del Campo Library at the juvenile detention center at Campo in 1985.

"Rosemary is one of Lemon Grove's most distinguished citizens," said Helen Ofield, president of the Lemon Grove Historical Society. "Her energy, wisdom, and kindness have benefited so many people, especially young people, over the years and enhanced the quality of life in our community."