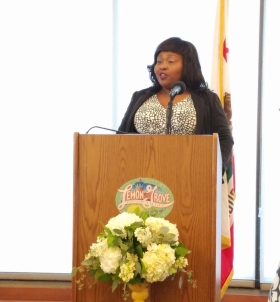 August 16, 2018 (Lemon Grove) -- Members of the Lemon Grove City Council and other city officials are grappling with concerns about a major budget deficit poised to sour the city’s future. The problem has led to media speculation that Lemon Grove might give up cityhood and become part of the County’s unincorporated area.

Yet, to a packed-to-the-rafters community room, recently-elected Mayor Raquel Vasquez painted a positive picture about the city’s many accomplishments in the past year and its challenges in the coming year. During her first State of the City address last week, the Mayor did raise the city’s financial dilemma, but not seeds for solutions over the long term.

In her nearly 20 minute address, Vasquez spoke with zestful enthusiasm as she noted that the city has engaged in increased street repairs, beautifying the city and repairing broken sidewalks. Lemon Grove has also added community events and recreation opportunities, supported public arts projects and planned for more park space. Shenoted how the city has improved public safety services, begun working regionally to help homeless individuals, and has been successful in “creating a stronger business and economic growth environment to encourage businesses to open their doors in the city of Lemon Grove.”

Benefitting from Senate Bill 1,which increased state gas taxes following passage over a year ago, Lemon Grove paved 4.8 miles of streets and filled 2,451 potholes with 201 tons of asphalt. Vasquez projected that future revenues from the state-imposed measure would allow for more spending in the coming year when the street maintenance and repair budget will be increased to a million dollars.

(When later questioned by East County Magazine, Vasquez acknowledged that if a November voter initiative to rollback the gas tax is successful, the city will be immediately forced to revert to repair spending levels from previous years.)

Civic pride events also took centerstage with concerts and movies in the park, and an Easter “Eggstravaganza.” A community bonfire took place during the holiday season which attracted some 5,000 residents and additional sponsorships. 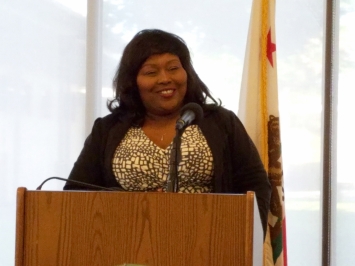 Vasquez also cited that the overall crime rate in Lemon Grove has continued a trend of being down 15 percent. In addition to the regular law enforcement service, a bicycle patrol team, funded by a Department of Justice grant in 2017, was commissioned, an effort it hopes continues when the city will attempt to reapply for the grant.

During the past year, all Lemon Grove Parks went alcohol- and smoke-free. Signage ensuring all park visitors are aware of the restrictions are being made possible with a grant from HealZones, a Kaiser Permanente program designed to help make healthy choices more accessible to people in underserved communities.

Following the popularity of “craft” beers, the City Council adopted regulations which will allow the breweries to open more easily. The first result of action is resulting in the opening of the first craft brewery this fall.

While Mayor Vasquez emphasized the positive accomplishments of the past year, she concluded her address by suggesting that the road might get bumpy in the coming years and more severe belt-tightening may be needed for the city’s financial survival.

“The good news is, we have made significant progress. Revenue for the City of Lemon Grove has steadily increased over the years, yet the rising the cost to operate continues to outpace these revenues,” Vasquez said.

“Rising costs in public safety, animal control, employee pensions and the overall cost of doing business has put us in a vulnerable position. As a result, we are facing a structural deficit. And the rise in cost for goods and services touches each and every one of us. It impacts the way we manage our overall quality of life. We all have tightened our belts; and made tough cuts in spending to manage the budget. This structural deficit did not happen over- night and it will not be solved over-night,” the mayor continued.

Vasquez said that the city is currently tapping into its emergency reserves which has been set aside for natural disasters in order to balance the budget. She called it a “temporary fix,” adding, “The structural deficit will continue to grow.” She added, “As we continue to do more with less, this is our specialty, we know that often the best solutions to address challenges come from you.”

She said that the city will host a budget workshop in October involving the city council, staff, and community to review the city’s ongoing expenses, funding opportunities, and areas of city services where cuts may be made. “The City budget is transparent. The numbers are the numbers,” Vasquez said. “We will also analyze the benefits and drawbacks to making the proposed budgetary cuts in services. With a sincere commitment to balance the budget and strengthen our economy.”

While some on the Council recently sought to alleviate the budget crunch by asking voters to approve certain tax increases, the proposals were defeated by the Council majority.

Council member Jerry Jones, an outspoken long-time resident who previously served on the Lemon Grove School District Board, is concerned that the city is in deeper trouble than which Mayor Vasquez and fellow Council members are willing to admit.

At a City Council meeting prior to the State of the City address, Jones and fellow Council member Matt Mendoza voted against a proposed half-cent sales tax measure and also shot down a proposed five percent tax on marijuana business revenue that would have been brought to voters in November. The vote to put a half-cent sales tax on the ballot required a minimum of four votes from the city council in support of the measure, but failed to meet the four-fifth threshold required to place it on the ballot, although it technically passed by a 3-2 vote.

“We did not deny the voters a chance to be heard, quite the contrary. We saved them from a badly planned tax measure, doomed to failure [by voters not passing it] and the inevitable bankruptcy that would have followed. Believe me, this Mayor and Staff have no back up plan for this failure,” Jones states in an email to ECM.

“We are 16 percent (almost $2 million) over our emergency reserves and have time to do this right,” Jones continues. “Even the staff report says that we can operate through 2021 without going below our policy amount of 25 percent. In the dark days of the Great Recession we got down to 12 percent. No one in Lemon Grove should think that no one on the council has a plan or had a plan going in because I did and presented it.”

Had the proposal gone to voters and passed, the revenue would have been directed to go into the general fund – a major of which goes into public safety including the Sheriff’s department, fire department, and animal control.

Jones said that he would support a sales tax increase measure to go to voters when all of the details have been ironed out and it would be supported by various community groups.

“I have had experience with these types of issues in the past. You need to have all of your ducks in a row before you can make a good case to voters on why they should support a measure to support to increase taxes on themselves,” he maintains.

“Bankruptcy and disincorporating our city won’t immediately solve any problems overnight. There are all kinds of costs and implications of such a move that the public doesn’t realize,” Jones concludes. “We don’t know even if the County of San Diego would necessarily want to take over our area in the first place.”

Asked to respond to Jones' criticisms, Vasquez replied via email to ECM, "That is the opinion of Council Member Jones and I will not comment on his opinions. Please reference my State of the City Address for the City’s financial position."

Listen to the address here: http://www.mediafire.com/file/sraybwvl89881pc/LemonGroveStateOfTheCity.mp3

Powerpoint Slides provided by the City of Lemon Grove: