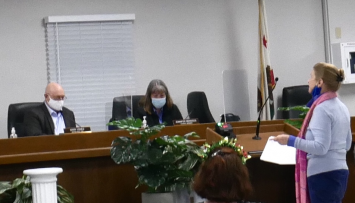 December 14, 2021 (Lemon Grove) — “We are a mom and pop store,” said Alisha Hormiz, as she stood at the podium facing the Lemon Grove City Council. “We want to earn your trust, and to work with you every step of the way,” she pleaded. “So please give us a chance.”

Alisha and her spouse, Peter Hormiz, have run the Discount Market convenience store on the corner of Broadway and Main Street for the past 21 years. Recently, they requested City permission to sell ten percent of their inventory as alcohol, both to help them financially and to listen to their customers’ wishes. The Planning Commission denied their request for the Conditional Use Permit (CUP) they needed — an appeal to the City Council was now their final option to try to win their permit.

The City Council hearing ran for over two hours on December 7. This format of civic proceeding transmutes the City Council into a quasi-judicial body, with the goal of hearing both sides and then voting to reach a verdict. The room was packed full of supporters of the Hormizes’ cause including loyal customers, neighbors, and even their landlord. Those in attendance came with concerns about the treatment of small businesses in Lemon Grove, and with the functioning of their City Council staff.

Making the case for the city was Community Development Manager Noah Alvey. He emphasized a high concentration of alcohol sales in the store’s census tract — five times the state’s recommended amount — as well as an abundance of crime in the area, as the reasons for the Planning Commission’s original decision. He recommended that the city follow suit and uphold the first ruling.

Then, both Alisha Hormiz and her legal representation laid out why they should be granted the permit. They spoke of the precedence of off-sale alcohol CUPs in other highly concentrated parts of Lemon Grove, and argued that the Discount Market actually has lower than average crime rates. They also emphasized the Hormizes’ tenure in the Lemon Grove community as positive influences, stating that they treat customers like family and care for the homeless. 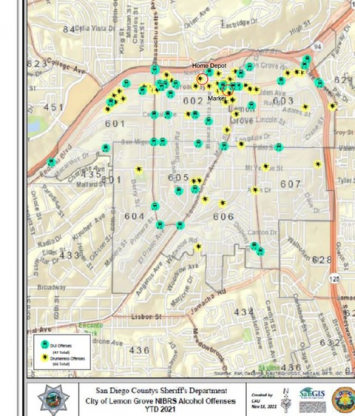 In the end, the City Council upheld the Planning Commission’s decision by a vote of three to one, with Councilmember Liana LeBaron as the sole vote in favor of the Hormizes. Councilmember Jerry Jones presided over the meeting as Mayor Pro Tem and voiced defense of his vote.

However, the public in attendance staunchly disagreed with the decision. During public comment on the case leading up to the vote, many stood and voiced their advocacy, including the Hormizes’ landlord Steven Zybelman.

Zybelman told Council how he put faith in the couple as young, ambitious business planners over two decades ago, adding that he feels exactly the same now.

“I see no reason why we should doubt the credibility, the responsibility, and the oath that they would take to govern their business and operate it correctly and legally,” he testified. “I honestly believe that these people deserve to have this license,” he continued. “I ask you to consider their application and offer them your blessing as well.”

Ten other individuals spoke in favor of the Hormizes, from a retired resident who relies on the safe store within walking distance, to a mother and two sons who travel miles out of their way to shop at the store because of the quality of care they receive, and to community members who want the Hormizes’ business to benefit from new housing developments in their area. Many stressed the Hormizes’ willingness to change their hours or restrict the type of sales.

“I would much prefer to support the Discount Market and Peter and Alisha’s family versus the big corporation chain markets like 7/11,” said Jessyka Heredia, a Lemon Grove resident and member of San Diego’s Business Improvement Districts.

“I’m finding a pattern in Lemon Grove when it comes to small mom and pops versus big corporations,” she continued. “It seems it’s easy for big corporations like 7/11, which will get approved for the same license just one block away on the same street. Why do all the corporations get all the privileges?”

Still, no CUP was granted for the Discount Market.

“It’s not easy, it’s not personal, but we’re here making policy,” said Mayor Pro Tem Jones. “We have to make the findings within the regulations that have been written. You can’t make regulations one business at a time. The bottom line is that we have an over-concentration in the city.”

Jones also addressed the treatment of small businesses. He admitted some truth to the concerns, but countered by citing a Walgreens that was denied an off-sale alcohol permit just like the Hormizes.

“There’s been some allegations that we treat big boxes differently than the small stores,” he said, “and I suppose there may be something to that. But I don’t think it’s as common as people want to think.”

Residents at the meeting were not only concerned with these potentially unequal policy practices. Some also expressed unease with the City Council’s communication style, both between themselves and with the public.

In their comments, many cited what they observe to be disrespect, lack of collaboration, and overall tension amongst the City Councilmembers and the Mayor. They called for a spectrum of changes, from better reporting to the public about staff’s third party meetings, to an internal tax audit.

Yet at the meeting, the public’s qualms with their City Council only grew when evident tensions boiled over during the public comment of resident Chris Williams. Back to back recesses were called by Mayor Pro Tem Jones — on the second he threatened to clear the room.

During his allotted three minutes, Williams was responding to two previous speakers from regional non-profits, who told Councilmembers that alcohol increases crime and hurts children — the only public opinions against the Hormizes voiced at the hearing. The second of the two used Casa de Oro, a neighborhood adjacent to Lemon Grove, in a comparison with La Jolla to illustrate the point.

Williams took issue with this comparison. “La Jolla has resources,” he refuted. “If we want to make sure that crime is down we should look at giving the resources to the community. Access to alcohol is just one very small reason for why crime is up.”

Towards the end of delivering this comment, Williams felt that Mayor Pro Tem Jones was not giving his full attention, and Williams requested that he do so. This request incited both men to argue and eventually raise their voices, until Jones called the first recess. Hear audio.

When the meeting resumed, Williams requested that he be allotted his remaining time, which he estimated to be 15 seconds. Jones moved to close the public comment portion of the hearing, to which Williams objected.

“How come I don’t get my time? Because I say something he doesn’t like?” asked Williams, holding the microphone.

At Jones’s order, law enforcement present at the meeting confiscated the microphone from Williams. Councilmember Lebaron asked Councilmember Mendoza why they could not hear the rest of the comment.

“I am tired of being yelled at by you Mr. Williams. I’ve listened to you enough,” Mendoza replied.

As the roll was then counted to close public comment, Councilmember LeBaron leaned into her microphone. 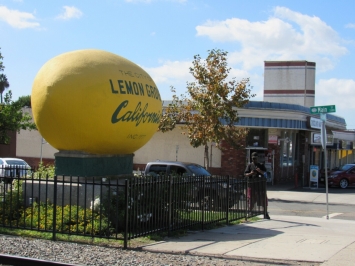 I believe it is a huge abuse of your power, Councilmembers, to censor the public,” she said.

This prompted members of the public to cry out, “You cut him off!” Jones then called the second recess and threatened to clear the room if he had to call a third. Hear audio.

Afterwards, the public hearing resumed and was carried out to completion, with final questioning and deliberations yielding the three-to-one verdict.

The City Council functioned lawfully when denying the Hormizes appeal, not straying from the general plan nor overriding colleagues on the Planning Commission, though the Council had the power to grant an exception.  But the partnership that composes civic life between people and members of government wore thin, fueling the continued frustration of Lemon Grove’s public.

When it comes to Lemon Grove City Council meetings, the WWF, comes close. People who attend the meetings are rarely civil. They act like toddlers throwing a tantrum when they don't get their way. Anyone who attends the meetings or listens to the audios of the meetings which can be found on lemongrove.ca.gov, can plainly see/hear that. There are codes of conduct and procedure that need to be followed. Voices should not be raised, people should listen, and civility should always be adhered to, no matter what. By listening to this audio, we can see who is embarrassing the City of Lemon Grove and who is not. In these past 18 months or so we have seen many, many, way too many people being obstructionists and not actually trying to help the current situations. This is also the case with Lemon Grove City Council meetings. I for one, have been horribly embarassed by what I have heard. Hoping this will change in the future.
So lets make some things clear. First is that this request for alcohol sales is right in the middle of a crime hotspot as shown by a heat map included in the staff report. That hot spot map showed all of the alcohol crimes in the area. That alone showed that permitting sales in the area would only feed the problem. That alone was reason enough for denial. The fact that there are 5 times more outlets in that area than recommended was the final straw. This is not the first or last alcohol establishment, large or small, to be denied a permit in a city with an over concentration of off-sales alcohol sites. As much as I appreciate the passion and support for that the speakers had for this applicant, it was my job to keep order and a civil discourse in the running of our meeting. When Mr. Williams began his remarks the clerk either forgot to turn on the timer or there was a malfunction. When I looked away to respond to the clerks attempt to get my attention letting me know his time was up he became aggressive, rude and attempted to tell me how to do my job. Mr. Williams’ time was up and when he continued to be disruptive and refused to be reasonable I called a recess. When he refused to comply, give up the mic and continued to be disruptive I had to call for a second recess in order to restore order. This can clearly be heard on the tape. I then called on the lieutenant to help me retore order and Mr Williams refused to give up the mic to him. After the second recess I asked the clerk to call the roll even if it was over the constant speaking of Mr. Williams. Again this can be heard clearly on the tape. Council Member La Baron’s remark about censorship of the public is whole untrue. Every speaker that filled out a slip, up to the point that Council Member Mendoza made a motion to close the public hearing, got a chance to speak. And everyone got the full three minutes normally allotted. One speaker slip came in after the motion but at that point the hearing was closed. I appreciate the passion but don’t mistake disruption of the public’s business for the sake political theater as the voice of the people. It’s clear that Council Member La Baron has her supports and they show up regularly at our meetings. But the rest of us have our supports as well and their views and concerns don’t always align with Council Member La Baron and Chris Williams.