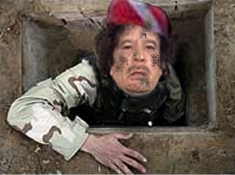 April 1, 2011 (Campo) – Shortly before dawn this morning, U.S. Border Patrol agents made a startling discovery along the border south of Campo in San Diego’s East County.

Alerted by Minutemen who observed unusual activity near the border fence, Border Patrol agents used infra-red night-vision technology and ground-penetrating radar to confirm location of a new tunnel from Mexico into the U.S.  Initially, agents suspected drug smuggling. But in hauling out the leader, they nabbed one of the world’s most wanted despots: Libyan Colonel Moammar Kadhafi.

Kadhafi fled his homeland after his forces massacred civilians, prompting United Nations-backed coalition attacks, an escalating civil war, and global calls for his ouster. He told officials that he hoped to make his new home in San Diego after hearing positive stories about our region from his son, who recently attended college here before returning to Libya to help combat rebel forces.

Now in detention at the Corrections Corporation of America (CCA) immigration detention facility in Otay Mesa, Kadhafi has asked American officials to grant him asylum in the U.S.

However, a White House source has informed ECM that Kadhafi will instead be deported to the Hague, where he will stand trial for war crimes in the World Court.

Kadhafi’s bank accounts have been frozen. However , under interrogation a Kadhafi guard detained at the border with Kadhafi disclosed that a Libyan advance team stashed millions of dollars worth of ill-gotten gain for the deposed ruler (including cash, gold and jewels) somewhere in the rugged high desert mountains of East County.

That photo made me spill my morning coffee it is just a be yourself quotes is so hilarious, I hope to read another article on the next april fools

Ha! Made me laugh - thanks for that! And all this time I thought he was hiding in his jewelry boxes somewhere with all his loot!