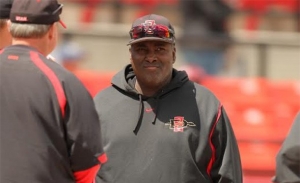 Smokeless tobacco contains 28 cancer-causing carcinogens, according to the National Cancer Institute. These include formaldehyde, lead, cyanide, benzene and arsenic in addition to nicotine.  Chewing tobacco can cause tooth decay and tooth loss, and worst of all, cancer.   Each year, 36,000 Americans are diagnosed with oral cancer—and nearly half of those die within five years after being diagnosed.

The Hall of Famer Tony Gwynn coached baseball at San Diego State after leaving the San Diego Padres, and his death has hit home – hard – for SDSU athletes.

Two San Diego State alumni would went on to become major league players have also announced they want to quit using chewing tobacco.  Addison Reed, the Arizona Diamond Backs pitcher, told MLB.com that on the day Gwynn died, he threw away tins of smokeless tobacco from his locker and car. Another SDSU graduate, Stephen Strasburg, now a pitcher with the Washington Nationals, also announced his intention to quit the habit, saying, “Bottom line, I want to be around for my family.”