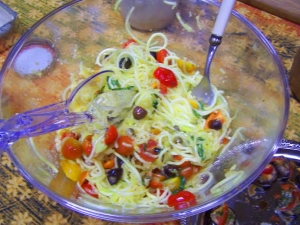 March 6, 2014 (Crest)--Mimi Kirk has written her second book on raw food cuisine entitled Live Raw Around the World, and it abounds with multicultural recipes from France, Spain, Germany, Italy, Greece, India and Thailand. Mimi Kirk, a local author from Ramona, presents techniques and information on how to create surprisingly delicious raw food recipes at home. Her presentation included a live demonstration, creating almond milk in her food processor and using a spiral slicer to make “pasta” out of vegetables. After her demonstration, Mimi served the small gathering a sampling of stuffed mushrooms; vegetable pasta with tomatoes, olives, and cashews that resemble parmesan cheese for the topping; and small delectable cookies adorned with small carob chocolate chips.

When Kirk demonstrated how to make almond milk, she told the small crowd at the library that the almonds must be soaked in water overnight. Then into the high speed blender or food processor go two juicy dates, a cup of the soaked almonds, a dash of vanilla or cacao; and you have a healthy raw drink. In her book, Kirk also has recipes for cashew milk, crème brulle, ice cream, soups, salads, sausage, and Pad Thai, among many other foods people enjoy today.

Kirk’s first book on raw food is entitled Live Raw. In her latest book, Live Raw Around the World,  Kirk has taken traditional recipes from differing cultures, such as Tiramisu from Italy, Paella from Spain, Eggplant Moussaka from Greece, and Curries from India, to name only a few, and reconfigured them using only raw foods in a delicious and appetizing style. In this second book, Kirk also gives all of the background information necessary to begin eating a raw food diet: basic ingredients, kitchen tools and equipment, juicing, nut milk, herbs and spices, sprouting, local shopping and sustainability, nutrition information, healthy lifestyles, and more. In addition, the book contains colorful photos of foods from around the world in their raw state and in prepared dishes, and it is available through our San Diego County Library System.

The subtitle to this second book on raw food is "International Raw Food Recipes for Good Health and Timeless Beauty." In fact, just before her 71st birthday in 2009, Mimi was awarded the unique title of "Sexiest Vegetarian over 50" by PETA, People for the Ethical Treatment of Animals. After being a vegetarian/vegan for 40 years, Kirk--at age 69--began to have high cholesterol, arthritis, high blood pressure, and an extra 20 lbs. Convinced she could deal with those problems without drugs and in a natural way, she discovered the raw food diet. Today, she is feeling younger and healthier than ever and lives without any of the medical issues she developed before starting her raw food diet.

Mimi Kirk transitioned completely to this new way of eating after experiencing more energy and weight loss in only one week. She was fascinated and wanted more! One big challenge was "to satisfy my taste buds on a daily basis...and my cravings for cooked food."  In order to preserve the enzymes in the raw food--the whole reason for its healthy benefits--heating the food cannot exceed a temperature of 115 degrees Fahrenheit. Raw food contains enzymes which keep the body's cells functioning, but the body stops making them after age 35. We can create them with our food, saliva, and chewing 30 times before swallowing. The author also incorporated the habit of starting the day with water and 1/2 lemon to get the body in an alkaline state and green vegetable drinks in the morning. Also, she recommends using digestive enzymes in caps to be taken before or after a meal or sprinkled on top. For a sweetener, she usually uses a grade B maple syrup and Vitamins B and D as a supplement, but in a liquid form.

Mimi's cravings abated, and she kept feeling more energy, balance, and health in her life. The word "adventure" comes to mind when describing Mimi's relationship with her healthy food plan. A great communicator, she enjoys sharing with others her enthusiasm for raw foods and all the benefits they can provide; as well as traveling around the world to discover more recipes.

During the demonstration at the library, she used a spiral slicer for making "pasta" out of vegetables. The spirals look like colorful spaghetti made from zucchinis, carrots, peppers, cucumbers, etc. This spiral slicer and other equipment are available on her website for purchase, and the site also contains stunning pictures of raw food, recipes, Mimi Kirk’s schedule of appearances, and more. The website address is http://www.youngonrawfood.com.

Life is an adventure, and food is a large part of it. Mimi’s admonitions to “love yourself and not be so concerned with aging” send a positive message to all. Happily, she also provides the tools and the encouragement needed to embark on a new way of enjoying food and health and life!