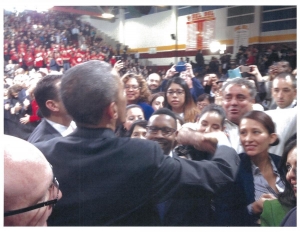 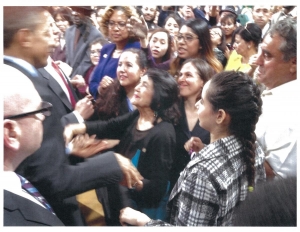 November 23, 2014 (San Diego) – Families who no longer need to live in fear of separation or deportation have much to be thankful for following President Barack Obama’s immigration reforms announced last week. Locally, immigration activists are sharing their reactions, including Border Angels founder Enrique Morones, who was with President Obama during his historic executive action speech at Del Sol High School in Las Vegas.

“It was wonderful to join old friends that have fought and continue to be with us in the struggle for humane immigration policies, and as we discussed, we still have a long ways to go,” Morones wrote in a letter thanking supporters.  “As I told President Obama, `Gracias, this executive action is why many of us voted for you,” Morones added. “We have much more work to do, more to be included, Si Se Puede!’”