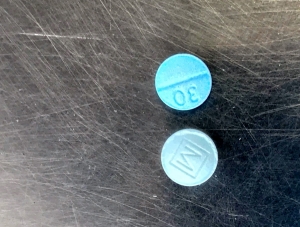 July 25, 2019 (San Diego’s East County) – Four overdose deaths have occurred in the past 24 hours in Lakeside, Santee, Poway and Valley Center due to a counterfeit oxycodone drug known as M-30.  The illicit blue pills known as M-30s contain fentanyl, so potent that a speck the size of a salt grain can kill you – or even just touching it. Users may swallow the pills or crush and smoke them.

San Diego Sheriff’s Narcotics and Gang Division responded to the four overdose deaths. Detectives are now working with first responders to learn if they have received any similar overdose calls.