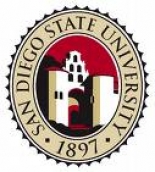 April 21, 2013 (San Diego) – San Diego State University (SDSU) police have issued an alert to warn students of a man who grabbed a woman, 20, who was walking in the south alley of 5600 Montezuma Road just off campus this morning at 3 a.m.  The suspect is described as an Asian male, tall with spiked hair,  in  his mid-20s, wearing black-framed glasses, a white shirt and light jeans.  He fled in a black four-door BMW toward Campanile Drive.

According to police, the suspect  walked up to the victim, grabbed her arm and leg and attempted to pull her. She suffered no injuries and no weapon was used in the incident.

Police remind students and residents to  be aware of your surroundings, walk with others in a group and report suspicious activity to police by dialing 9-1-1.