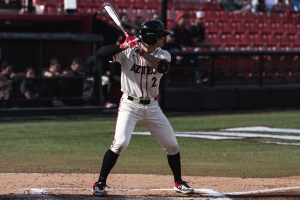 April 7, 2019 (Reno) - The San Diego State baseball team used four RBIs from Chad Bible and four shutout innings of relief from Adrian Mardueno in a series-clinching 11-3 win over Nevada on Sunday afternoon.  The Aztecs improve to 18-14 (7-6 Mountain West), while the Wolf Pack fall to 16-15 (6-9 MW).

After a Dillon Shrum homer in the bottom of the first cut the Aztec lead to 3-1, Brian Leonhardt and Bible broke things open in the third. Leonhardt brought home Casey Schmitt on an RBI single before Chad Bible hit his team-leading fourth home run of the season -- a three-run shot -- to give the Aztecs a 7-1 lead.

The Aztecs tagged the Wolf Pack for another four runs an inning later with an error by Joshua Zamora allowing the first two pair of runs to score. Bible capped the fourth inning with a single up the middle, scoring Mike Jarvis from second for an 11-1 SDSU lead.

Making his first career start, Valhalla alum Casey O'Sullivan pitched three innings, allowing two runs on five hits. O'Sullivan got into a bit of trouble in the fourth, allowing three consecutive singles before Mardueno took over on the mound in a bases-loaded, no-out situation.

Mardueno immediately struck out the first two batters he faced, and after allowing an infield single, Mardueno minimized the damage by recording his third strikeout of the frame to keep it an 11-2 Aztec lead heading to the fifth.

That infield single was the only hit Mardueno allowed, as Mardueno faced the minimum over the next nine batters before Jacob Flores took over and pitched the final two innings of the game.

Mardueno, who impressed earlier this week with seven shutout innings at No. 6/7 Oregon State, finished his outing with 4.0 shutout innings, one hit and one walk allowed to earn the win.

The Aztecs return home for a midweek contest against Loyola Marymount on Tuesday at 6:00 p.m. before heading back on the road next weekend at Cal State Fullerton.