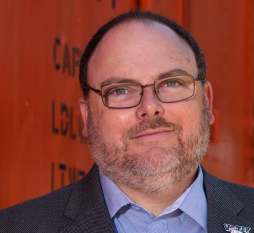 October 11, 2020 (La Mesa) – Mark Papenfuss, one of six candidates running for the La Mesa City Council, missed our candidate forum last month due to a family emergency but participated in a separate interview on Zoom.

He shared his views on ideas for La Mesa’s downtown village, improving racial justice and public safety, housing and homelessness, the pandemic, and the need to in his words, help La Mesa “rise from the ashes” after a riot and fires by forging a new path for the future.  He touts his business experience and the need for leaders who are free of conflicts of interest or developer donations.

Scroll down for highlights from our interview, or click here to view the full video: https://www.youtube.com/watch?v=ugPdqOtqHCY&feature=youtu.be

Papenfuss says he knows “firsthand the struggles of trying to raise a family in the city.”  He voiced frustration over “the path the city has taken, especially over the last four years. I’ve watched us almost lose the farmer’s market, all the deals with developers, buildings burned down during the riot.” H e says he’s attended council meetings and town halls, leading him to wonder “why the voices of La Mesa are not being listened to…My only obligation is to the people of La Mesa. I don’t have to listen to corporations or developers,” he says, adding that he has not taken money from developers or corporate interests to avoid even the appearance of conflicts.

He believes  his work for a large telecommunications company to resolve high level complaints and work with people across the nation has taught him how to forge compromises, “any important quality for anybody to have, especially in politics.”

He believes the problems that led to the May 30 protest and riot have been building for years. “We have a great opportunity to change that,” he says. He believes police should be “the face of the community…and act in the best interests of the community.”  He sees opportunity to work with a new police chief and hopes the new, yet-to-be-chosen chief will be open to community feedback.  He is concerned about racial targeting and use of force “not looked into” adequately and supports a police oversight committee.  He wants to bring accountability and transparency on police issues.

“Police right now are being used as a catch-all,” he says. He supports work of the homeless task force and wants to see alternative responses to calls involving the homeless, for example, to let police focus on their work as a peace officer. He would look at budgets for other cities of similar sizes and crime rates to compare percentages spent on police vs. other community priorities.

Prior to our interview, Papenfuss has pledged to help La Mesa “rise from the ashes” after three major buildings burned downtown during the riots. Those losses, while tragic, also present potential opportunities to reimagine downtown, which has also faced many business closures recently.

“The village is what made me fall in love with La Mesa, that small town charm,” he says.  He wants to do “everything we can” to help businesses come back to the village.  He wants the farmer’s market to be “bigger and better” with spots provided to some local businesses at the market. He wants to assure there is adequate parking.  “The public lot needs to stay…We shouldn’t be selling any city lands. We should be putting the downtown library in there that was promised to people a long time ago,” he says.  He notes that loss of small businesses began before COVID, which has made the problem worse. “Small businesses are very important…That’s something I really want to focus on,” he says.

“I don’t ever want La Mesa to be like downtown San Diego, with very tall buildings,” Papenfuss says.  He supports height limits now in the village, but could envision maybe four or five stories maximum in areas further out, beyond the village.  He is concerned about apartments being built that only have a handful of affordable units, yet bring parking, traffic, and increased class sizes to schools, a problem he says impacts “anyone with kids, grandkids.”  He believes that any new apartments built should have to have a higher percentage of affordable units.

Helping the homeless is a “good thing” in his view, and he supports efforts to help homeless in La Mesa to “be clean and sober, get back on their feet, I’m all for that.”We as a society really need to focus on helping our neighbors.”

Papenfuss criticizes the city for using some CARES Act relief funds to reimburse the city for its costs of complying with new health requirements.(The city also allocated some relief funds for businesses and renters.)  He thinks reserves should have been used to cover the city’s costs. “If this is not an emergency, I don’t know what is,” he observes.  He wants any future relief funds to go only to businesses and to the people, to help save jobs, sales tax revenues, and prevent evictions.

“This really is uncharted times for our city, with all the recent events locally and globally,” Papenfuss concludes.  “Our city has a strenuous path ahead of us and I ask your support in navigating this path.”

He acknowledges that he faces an uphill battle, outspent by well-funded opponents, but suggests that obligations to large donors “means they really have to listen to organizations even if it goes against the interests of the people.  I’m running this from my heart,” he says, adding that he wants to be a “voice of the people, and my actions on the City Council will be based on that.”

He concludes that the leadership experienced in the last four years “has led us to where we are now.  It’s time for a fresh set of eyes to address the issues.”

You can learn more about all six candidates in the race, view our candidate forum with three of the candidates and find links to interviews with two other candidates, at https://www.eastcountymagazine.org/view-video-la-mesa-city-council-candi...