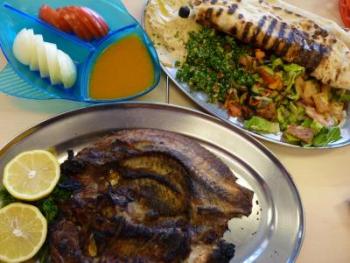 March 29, 2013 (El Cajon )—Masgoof—fish smoked whole in a clay oven with wood fire, Iraqi-style--at Nahrain Fish & Chicken Grill in El Cajon  is the freshest you’ll find in East County.  Choose from fish caught daily displayed in a glass case, or at times, take the opportunity to catch your own with a fishing net in a tiled pool inside this eatery, which is popular with  both Middle Eastern and Western customers.

My dining companion and I savor a whole red snapper that is tender and juicy on the inside, crispy on the outside with a paper thin skin and a delightful smoked wood flavor.  It is served with a mango sauce (amba) that is balanced, sweet and spicy, along with onions, tomatoes, lemon parsley and freshly baked tanoor bread. 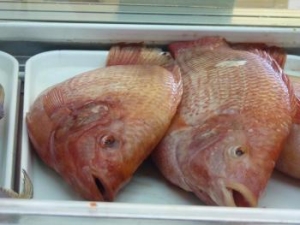 “It’s the old-fashioned way of cooking,” explains Benny, who runs the restaurant along with his wife, Noora.  They are Iraqi Christians who came to America over 20 years ago to build a better life for their three sons.

Cooking Masgoof vertically in a clay oven, or tandoori, is a method that dates back generations.  Impurities drain away and the high heat seals in juices, maximizing flavor.  Choose from tilapia, catfish, bass, carp, or snapper.  You can also order chicken prepared the same way.

Besides the tandoor items, you can also order up halal beef and chicken, kebabs or fried fish and chips, among other dishes, with either traditional Middle Eastern or American-style sides.

We chose an appetizer sampler platter that I highly recommend. It included a delicious eggplant salad as well as tabouleh, hummus 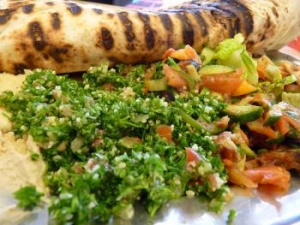 and fatoush (a green salad).  A vegetarian could feast on these alone with total satisfaction. (Note: Photo shows just half of the appetizer platter, which has very generous portions)

There is no fishy smell. That’s because all fish is fresh daily. Fish is sold by the pound, with a higher rate for live caught.  It’s a surprisingly affordable feast.   Our feast for two including 1.9 pound fish, appetizer sampler platter, two bottles of water and complimentary desserts (dates , which Benny called “nature’s sweets”) came to about $30.

Benny has a degree in physics and worked as a physicist specializing in quality control before he and his wife went into the restaurant business here. His attention to quality is evident in the fresh, high quality ingredients.

Nahrain's, now two years old, has become a popular gathering place.  It is open daily for lunch and dinner from 10:30 a.m. to 9 p.m., also serving groups for special occasions. 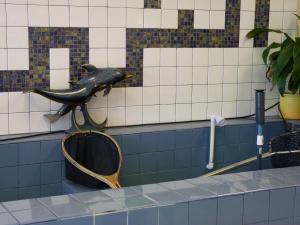 We have some families that want to come in and fish,” says Benny. “Yesterday, it was like a festival in here.”  For special occasions, Nahrain’s can create special dishes to feed a crowd, Benny adds.  “We do a full lamb on racks.”

Iraqis often prefer the larger fish.  A big fish can feed eight people. Some call ahead so their orders are waiting when they arrive.

Nahrain means `two rivers.’  It’s named after the Tigris and Euphrates in ancient Mesopotamia, the cradle of civilization00and the family’s homeland.  “It’s driven from the bible to have the names of two rivers in my hands,” Benny says.

He is Syriac and his wife is Chaldean. Both religions are forms of Christianity related to Catholocism.  Benny speaks Ara 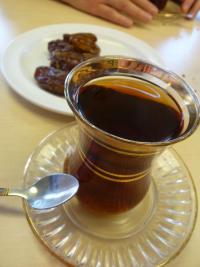 maic, the language of the Bible, as well as English. His menu is in English and Arabic. His clientele includes Christians as well as Muslim immigrants and others.

He and his family are from Mosul in northern Iraq, though they lived in Baghdad before emigrating to the U.S.  “At the time, in Saddam’s era, even kids were not safe. They would take them away,” he recalled.  “Over the last 30 or 40 years, there were big wars, blood everywhere, bombing everywhere.” The violence goes back long before the U.S. invasion. “During the Iranian-Iraqi war, bombs and rockets went off endlessly…I said, why are we staying?”

His family had relatives in Los Angeles, so they decided to come to America. “It was a sacrifice. WE left everything behind.”  First, he finished his military service, so that he would have clean papers, he added.

Relatives wound up scattered across the globe, since exit visas were hard to obtain.  Family members went to England, Denmark, Sweden and Belgium as well as the U.S.  “We got fed up with the extremists,” Benny said.

At  the time, their children were ages 3, 5 and 9.  The family soon relocated to San Diego’s East County, among the first Iraqi immigrants here.  “When we first came here, we didn’t have a church.  We used to go to Santa Sofia,” Benny recalls. “ 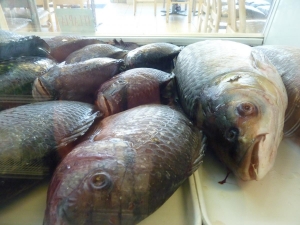 After the U.S. invasion of Iraq, waves of new immigrants arrived from Iraq.  .  El Cajon today has been estimated to have some 30,000 to 40,000 Iraqi Chaldeans, and even more Middle Easterners of other faiths and from other countries.

“Unfortunately the new immigrants are poor people, they don’t have money,” says Benny, who keeps his prices low so that there is something everyone can afford.

For his family, education has been the key to success.  “My Dad in 1943 was the first graduate of pharmacy in Iraq. The King himself gave him the degree,” Benny says proudly.

Their oldest son now has several degrees, including a masters degree in international business. “Our middle son will graduate in May and will be a doctor,” Benny says.  The youngest son is manager of a gym. 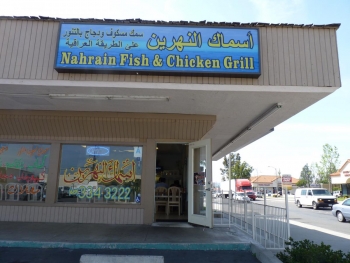 n home only once, for his father’s funeral, in the past two decades. Noora has been homesick at times. But for the family, there is no going back.

“Before the invasion was bad, but not like now. Saddam was bad but now it’s worse,” Benny says. “The country, there is no government. Corruption is all over the place. It is not safe.  They will kidnap you, ask for ransom, take your kid.”

The sun is shining outside Nahrain’s on East Main Street in El Cajon, a diverse neighborhood that has one undeniable attraction for Benny and his family.

“Hopefully,” he says, “It’s going to be peaceful here forever.”

If you visit Nahrain, please be sure to tell them you heard about the restaurant at East County Magazine.