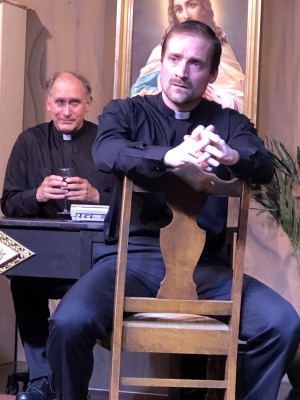 December 2, 2020 (Point Loma) - If you are Catholic, you will identify.  If not, you will identify with the perception of how people perceive Catholics.The authenticity of Bill C. Davis's production of Mass Appeal was done quite well with some creative licensing. Since I watched on Sunday, I actually felt like I was attending Mass before I watched my actual Mass. Because of Covid, I have been watching Mass online since March.

Two actors, Richard Rivera, who played the priest and Tim Benson as the young seminarian directed by Jerry Pilato go back and forth debating religion, faith and politics of the church. I love Richard Rivera and his acting ability lended him to the perfect priest.. After the young seminarian speaks out during one of his sermons, the priest takes him under his wings, so to speak, in order to lead him to the path of how things are done in the Church. It's quite the dynamics as the Seminarian flights for his values. Benson"s acting brings the strength to portray the hope of change. Making you want what he represents. The old and the new converging into a better way to communicate that in which we believe. 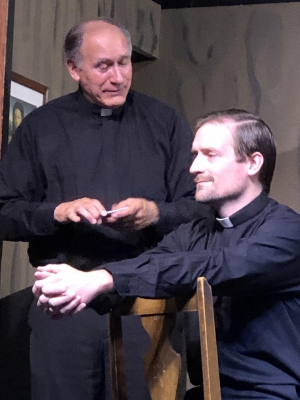 This is an encore production from about a month ago. The audience wanted more. Point Loma Playhouse answered back. You have one more chance; the show will stream December 5th for 24 hours. The show runs a couple hours with a short intermission.

I enjoyed the engaging religious banter. It was a breather from the political upheaval of the year that most plays have been focusing on. Those shows were good and had their place, but I was happy for something a little different. Now if someone would do a musical, you would see me smile.