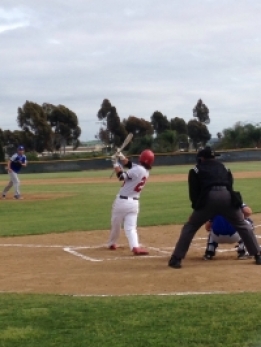 March 21, 2017 (Spring Valley) - ECM got its first taste of high school varsity baseball today as the 2-2 Mount Miguel Matadors competed in the Grossmont-Metro-City Tournament against the San Diego High School Cavers.  Senior Connor White started on the mound for the Matadors.

The Cavers got right to work in the first inning.  With runners on second and third, senior catcher Max Moran doubled and scored two RBIs and San Diego led 2-0.  Senior Keegan Stinson lined to left center to score another run and it was 3-0 Cavers. 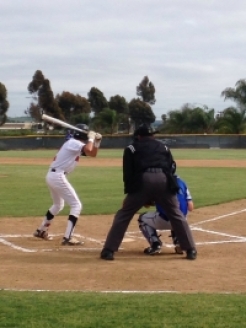 The Matadors got on the board in their half of the first with White’s single that scored sophomore Austin Ortiz and the score was 3-1 Cavers.

After an impressive second inning for White in which he struck out the side, he faltered again in the third, issuing two leadoff singles.  Senior Martin McLane hit a sacrifice bunt to score a run and the Cavers led 4-1.

The Matadors shrunk the lead to two again in the third when senior Andrew Montijo doubled down the third base line to score Ortiz and it was 4-2 San Diego.

White still managed to pitch pretty well until the fifth when Moran yet again singled and scored junior Michael Paredes and the Cavers led 5-2.  White’s day was over.

Senior Andrew Montijo didn't fare much better.  With the bases loaded in the sixth, he hit a batter, causing a run to come home and make it 6-2 Cavers.  Two wild pitches allowed two more runs and San Diego led 8-2.  Another run made it 9-2 San Diego before their half of the inning was over. 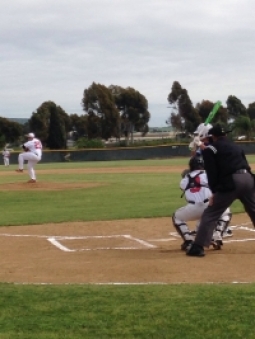 Still, the Matadors kept chipping away.  Montijo moved around the bases in their half of the sixth and sophomore catcher Cameron Beauzec drove him home with a single to make the score 9-3 Cavers.

Junior Joseph Mendoza took over in the seventh and didn't run over to first to cover the bag like a pitcher is supposed to and it cost the Matadors a run.  The Cavers reached double digits, leading 10-3.  Paredes singled and scored two and the Cavers led 12-3.  They took that to the end and the Matadors were demoralized on their home diamond, falling to 2-3 on the season.

The Matadors take a visit to the beach when they take the field against Coronado High School on Thursday.  First pitch is set for 3:30 p.m.