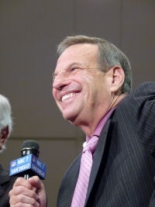 “When I campaigned for Mayor, I pledged that everyone would have a seat at the table, and that includes in my administration. I am proud to lead this team of talented and dedicated women and men. Together we will work hard for the citizens of San Diego,” said Mayor Bob Filner, who also released salaries of his staffers as part of his pledge toward transparency.

Staff in the Mayor’s office includes: