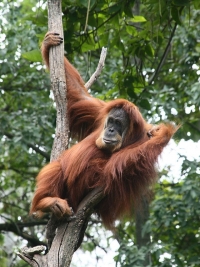 April 22, 2015 (Washington D.C.)--McDonald’s, the world’s largest fast-food chain, is the latest company that has pledged to eliminate deforestation from its global supply chains. Palm oil deforestation leads to destruction of habitat for endangered and threatened species such as orangutans, elephants, rhinoceros and tigers.

Aiming to eradicate deforestation from all commodities, McDonald’s is initially focusing on the sourcing of deforestation-free beef, fiber-based packaging, coffee, poultry and palm oil.

But Goodman adds,” The commitment is still a work in progress. To force real change, McDonald’s must demonstrate real action in the form of strong individual commodity commitments and on the ground follow through.”

McDonald’s pledge indicates that the company will source deforestation-free commodities, but until McDonald’s releases the details of the individual commodity commitments, the effectiveness of its pledge cannot be determined, Goodman cautions.

Calling the announcement a “great first step” Goodman adds, “The Golden Arches have the potential to be a symbol of environmental sustainability by reducing deforestation. The key to achieving that promise are detailed plans on how it will eliminate deforestation from the supply chain.”

Union of Concerned Scientists recently released its 2015 Palm Oil Scorecard and McDonald’s scored 24.4 out of 100 points, an increase of 3.3 point over their 2014 score.

Some companies ranked low on the scorecard have since made a strong commitment to eliminate palm oil harvested through deforestation from their products. Those companies including Dunkin’ Donuts, Baskin Robbins, Safeway, Pepsico, ConAgra, Kelloggs, Nestle, Danone, Unilever and General Mills.

Others have made more modest commitments, such as Whole Foods and Walmart. But some have made zero commitment despite consumer petitions asking them to do so. Those that have done nothing to remove deforestation palm oils from their food chain include CVS, Walgreens, CostCo, Kroger, Dollar Tree and Burt’s Bees, which is now owned by Clorox.

Shop locally. There are no more small markets. I shopped at Piggly Wiggly and the Lemon Grove
Pastry Shop. There was a local farm where I bought fresh corn and produce in Spring Valley. .