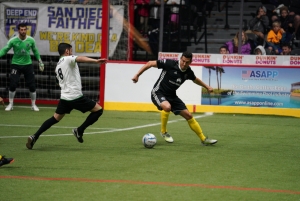 March 3, 2018 (San Diego) - The Pacific Division Champion San Diego Sockers (19-3) concluded their 2017-18 MASL regular season with a 10-3 rout of the El Paso Coyotes before a season-high crowd of 5,218 at Valley View Casino Center on Saturday night. Anthony Medina, who announced his retirement after nine seasons, scored three goals in his final game.

San Diego finishes the season with the second-best record in the league and now has the possibility of having home-field advantage throughout the playoffs if they can win the best-of-three Divisional Championship Series against the Tacoma Stare beginning Thursday in the Pacific Northwest.

Medina was the story of the evening, as he was honored between the first and second periods with a short ceremony and video, scoring San Diego's first and last goals.

San Diego tallied five times in the second half to put away the Coyotes. Matt Clare and Jamie Lovegrove added goals along with another each from Chiles and Medina.

Kraig Chiles was the team's leading scorer with 38 goals and 18 assists for 56 points. He led the league with seven game-winning goals.

San Diego now turns its attention to the postseason and a matchup against the Tacoma Stars. Game One is Thursday in Tacoma. Game two and a possible mini-game will be played at Valley View Casino Center on Saturday, March 10 at 7:05 p.m.